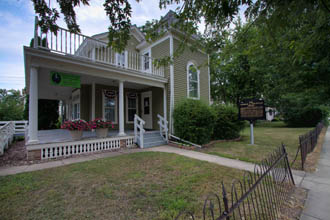 U.S. Rep. Andrew Volstead’s house is now a
National Landmark and is available for tours. 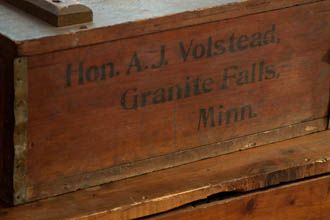 Many items owned by Rep. Volstead can be seen
in
the house, including his travel crates. 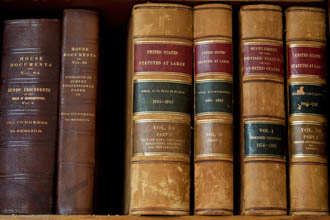 A collection of Rep. Volstead’s law book is just
one if the original items now on display.

Many original fixtures, including the lights, and original woodwork can be seen in the house.

An important era in our nation’s history began right here in Minnesota, in a quiet farm town in the middle of the prairie – his name, Andrew J. Volstead.

Granite Falls, MN was once home to Rep. Andrew J. Volstead, a nine-term Minnesota Congressman whose historic legislation had significant impact on our nation’s history. While Andrew Volstead may be most well-known for prohibition legislation that ultimately failed, he is also revered for farming co-operative legislation still enforce today.

Andrew J. Volstead was born in Minnesota in 1860, son of Norwegian immigrants. He graduated from St. Olaf College in Northfield, MN and became a schoolteacher, while studying law. In 1883, he was admitted to the bar and began practicing in Lac qui Parle County. He soon moved to Granite Falls, MN where he became county attorney, then briefly served as the city’s Mayor before being elected to his first term in U.S. Congress in 1903.

During his time in Congress, some legislators had the idea to “rid society of its ills,” improve health and cut crime. The idea was to ban the manufacture and sale of alcohol – prohibition. Rep. Volstead authored the act, which soon became called the Volstead Act.

“He wrote the Prohibition Act because he was a talented writer and he hoped the act would help society,” said Barb Benson, board member and past president of the Granite Falls Historical Society. “He wasn’t a teetotaler. He did support Prohibition, but he was devastated when it didn’t work out. It was a good idea in theory.”

Despite the failed legislation, Rep. Volstead had a significant impact in Congress. He went on to author the Capper-Volstead Act, which established farm cooperatives and allowed them to operate without fear of antitrust prosecution. He also was supportive of legislation outlawing lynchings, an unpopular stance at the time.

“Andrew Volstead was most proud of his legislation creating farm cooperatives,” said Barb. “The act has really helped farmers, including many who live in this area even today.”

By the early 1920s, low farm prices led his constituents to seek out new representation, and he lost his Congressional seat, returning to Granite Falls to resume his law practice.

Today, his home is one of only 25 National Landmarks in Minnesota and is available for tours by appointment.

“The home has many of the original fixtures, such as the lighting and the wood work,” said Barb, pointing out fixtures in the house. “We also have many items from Rep. Volstead, including some of his law books and trunks.”

Some of the rooms have now been transformed into classrooms for school trips and other historical outreach efforts, while much of the house’s original charm remains.

“The home tells the story of a man who was born and raised here and had a significant impact on our nation’s history,” explained Barb. “Many people aren’t aware that such important pieces of legislation are tied to Minnesota.”

If You Go:
The Andrew J. Volstead house is available for tours by appointment. Contact the Granite Falls Historical Society for more information.

Getting There:
Located in downtown Granite Falls, MN, the house is near the edge of the city’s historic downtown district on 9th Avenue and Prentice Street.

While You’re There:
Just down the street, be sure to visit the Granite Falls Kiwanis Popcorn Stand in the summer for a box of popcorn and ice cold 1919 Root Beer. Plan a Weekend Away in the Prairie Waters region to enjoy historic tours, shopping for handmade goods and local organic farms.