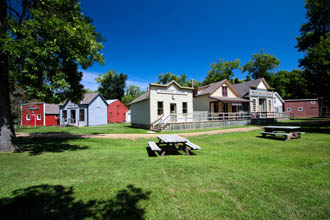 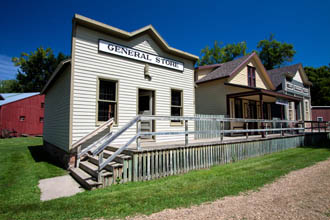 The town’s buildings are lined by a
wooden board walk. 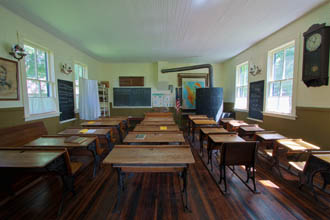 Inside the one-room school, visitors can see actual desks, books and other historic items. 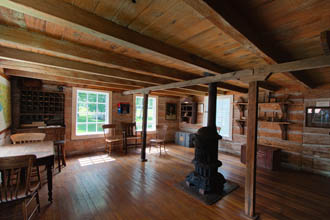 The Post Office is one of the buildings
representing daily life in the 1800s.

If you’ve ever wished you could travel back in history, to a prairie town with a general store, a blacksmith and wooden cabins on the edge of town, wish no more. Montevideo, MN’s Historic Chippewa City will make you feel like you’ve stepped back a hundred years in history. Today, the site preserves 24 actual historic buildings from the late 1800s in a 20-acre village, composing one of the most unique historic sites in the state.

“Each of the buildings is meticulously preserved,” said Bev Lambert, a member of the Chippewa County Historical Society’s Board of Directors who volunteers at the site. “Volunteers have given many hours to preserve and restore each one.”

The historical society calls Chippewa City the “crown jewel” of sites in Southwestern Minnesota, and that’s not an overstatement. Along the town’s wooden board walk sits a bank and dress shop, a fire hall, general store and a law office. A white church with a tall bell tour and a one-room schoolhouse are on site. Visitors can take a self-guided tour of each of the buildings, which are filled with antiques representing that building – dresses, a bank vault, a 1915 fire engine, McGuffey Readers, a carriage, a newspaper printing press and post office boxes.

The site is named for a town that was once plotted in the very same area. Montevideo, MN was once the site of Chippewa City, a village formed in 1868 that was soon overtaken when Montevideo was established just a few years later.

Though the town officially disappeared, its history was preserved in 1965 when volunteers created the Historic Chippewa City site.

“Actual buildings from around the area were moved onto the site, beginning with a one-room schoolhouse,” said Bev. “Over the years, a large crew has helped develop and keep up the buildings.”

After seeing the site, you won’t be surprised that scenes from the independent film Sweet Land were filmed here, and the buildings have inspired famed artist Terry Redlin, who used the Chippewa Bank Building in paintings.

“Our site is unlike any other historic site you’ll see in the state,” said Bev. “Here you can actually experience what life in an 1800s town was like.”

If You Go:
Historic Chippewa City is open Memorial Day through Labor Day, limited hours in September. The site also opens during the holiday season for special holiday themed events.

Getting There:
The site is located near downtown Montevideo, MN, near the intersection of Hwy 212 and Hwy 7.

While You’re There:
Visit Historic Chippewa City during a Prairie Waters Weekend Away. Stay at a local farm stay, shop for organic and handmade goods and stop for a wine tasting in the area.