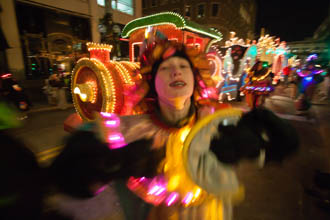 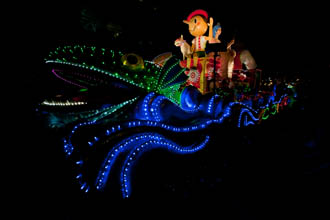 Storybook-inspired floats, such as Pinocchio shown above, were elaboratively lighted and animated. 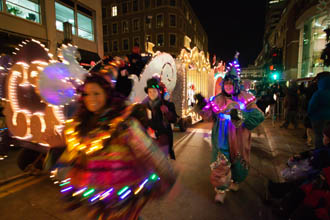 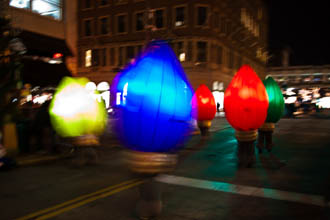 Even lightbulbs themselves were’nt to be outdone at the Holidazzle Parade, standing 8′ tall they were sure to be the brightest bulb on the tree each and every year. 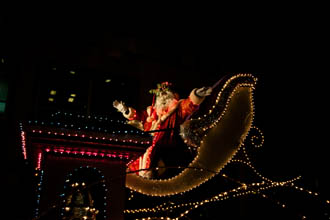 The Holidazzle Parade wasn’t complete without a visit from the big man from the North Pole, Santa.

For more than 20 years, the Holidazzle Parade delighted families from around the region. Though the parade marked its final run in 2013, we continue to celebrate the memory of the beloved Minneapolis tradition through our story and photos.

“Holidazzle lights,” shouts a vendor walking up and down the street just before the start of the Holidazzle Parade in Minneapolis, MN who carries dozens of green, pink, yellow and purple glow-in-the-dark necklaces. “They won’t keep you warm, but they’ll make you happy.”

Despite the cold – really cold – air, children line the streets, snuggling close to their parents and eagerly awaiting the familiar song “it’s a Holidazzle season…” Hundreds of parade goers crowd onto curbs or peer from store windows or down from skyways over the parade route.

Suddenly, the streetlights dim and the crowd cheers. It’s time for the parade to begin. Down the street, the first floats blink and glow as they make their way up the street – stopping for traffic lights along the way.

For more than 20 seasons, the lighted Holidazzle Parade delighted more than 300,000 people each season in downtown Minneapolis. Each year, local bands, holiday choirs, more than a dozen storybook-inspired floats like the Wizard of Oz and the Princess and the Pea, and 250 lighted and costumed characters marched down Nicollet Mall for the annual lighted parade.

Each night featured a local news anchor, radio host or other notable personality as Grand Marshal. Along the route, volunteers collected canned goods or cash for the Emergency Food Shelf Network. About 4,000 pounds of food was collected for those in need each parade season, according to parade officials.

The Holidazzle season began each year on the Friday after Thanksgiving and ran until the week before Christmas each night. While many of the traditional floats remained, over the years a number of new floats and features had been added, like a Howie Dazzle fiber optic snowman, and eight-foot-tall inflatable light bulb characters that bob up and down as they make their way down the street. In 2010, the parade even opened with a fireworks display.

The idea for the parade was conceived in 1992, the same year the Mall of America opened, as a means to encourage local residents and visitors to continue to shop and dine downtown. It run nearly without interruption for 20 seasons. The Holidazzle seems to have borrowed its creed from the U.S. Postal Service, “neither rain, nor snow, nor temps nearing 25 below…” The parade had only been cancelled 10 times in its history and it remained on schedule unless the wind chill dropped below -25 degrees or if snows were heavy enough to hinder the floats.

No matter how many times you’d seen those familiar lighted characters – Dorothy and the Tin Man, Peter Pan, Pinocchio and the Three Men in a Tub (rub a dub dub), Holidazzle was a magical tradition that marked the start of the holiday season in Minnesota, and wasn’t something that many missed.