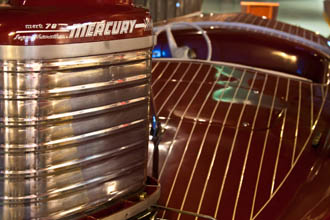 Larson’s Falls Flyer became popular during the MN resort boom of the 1930’s in the Brainerd Lakes region.

Classic wooden boats, all in showroom quality, are on display at the museum including Chris Craft & Gar Wood

Alexandria Boat Works, once a popular MN wooden boat company, artifacts are on display at the Museum.

Classic Boats Museum Shares Luxury MN Lakeside History: At the turn of the 20th century, a trip to the lake meant travel by rail and escape from city life at a luxury lakeside resort, while spending the day cruising the lake by wooden boat. It’s that classic American summer that’s celebrated at the Minnesota Lakes Maritime Museum in downtown Alexandria, MN.

“The museum opened in 2006,” said Kailynn Strater, museum guide. “Many of the boats have been donated, while others are on loan from the owners. We rotate the boats that are on display often, and show new boats from local collectors.”

The exterior of the classic wooden boat museum is designed like an early 1900s lake resort. Inside, dozens of classic wooden boats are on display, ranging from recognized classics like the Dungeness, the private tender of Andrew Carnegie that was once used by fish marketers in Duluth, to well-known Chris Craft classics. Several Larson, Alexandria Boat Works and Gar Wood designs are also on display, including the legendary Falls Flyer that became popular during the resort boom of the 1930s to 1960s. Vacationers on the way to the Brainerd Lakes area often passed Larson on the way to the lake, so the boats quickly grew in popularity.

“The museum celebrates the classic American summer,” said Kailynn. “Boats, fishing and lakeside resorts have made Minnesota a destination for more than a century. In the early 1900s, tourists would come to the area by rail, from the Twin Cities, and as far away as Texas, Oklahoma, Kansas or Missouri. Luxury Alexandria-area resorts, like Hotel Blake on Lake Carlos and Maryland Hotel and Resort on Lake Mary, were popular summertime destinations for visitors from around the country.”

Hotel Blake, an 80-person hotel, featured boating, lawn tennis, bowling, fish fries and dances every Saturday night. The resort was later destroyed in a fire, and by the 1960s, private cabins became more popular among tourists who could now travel to the area by car.

Today, the Museum’s boats are taken out onto the water again each June for the Chain of Lakes Classic Boat Show, held at the Arrowwood Resort.

“The boat show is one of the largest summer events,” said Kailynn. “We also host an annual Boats, Blues and BBQ festival each August, as a fundraiser for the Museum.”

Visitors can also tour a new History of Chris Craft Exhibit and Fishing Gallery with vintage lures and fishing gear.

If You Go:
The Minnesota Lakes Maritime Museum is open daily mid-May through mid-October. Admission is $6 for adults, $5 for seniors and $3 for students, or $15 for families.

Getting there:
The museum is located in Downtown Alexandria, MN. Take Hwy 29/Broadway to 3rd Avenue, and the Museum will be just to the left.