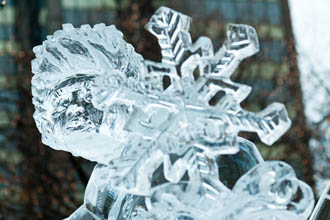 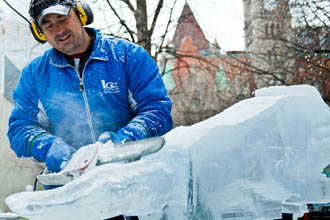 Carnival-goers can see ice carving in action in
the park, or finished sculptures lit up at night. 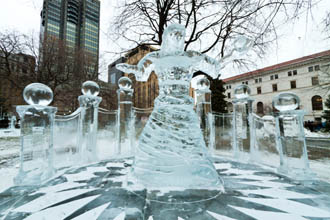 The St. Paul Winter Carnival was created to
celebrate winter and prove MN is a winter wonderland. 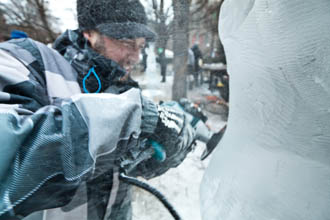 Ice sculptures compete in two
categories of sculpting based on size. 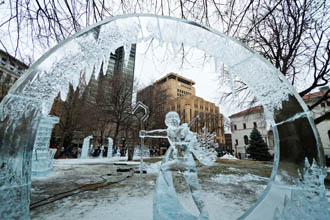 Final sculptures are on display in St. Paul’s
Rice Park throughout the St. Paul Winter Carnival.

Every year as winter digs in in Minnesota, local residents head outdoors to celebrate the season at the St. Paul Winter Carnival. A celebration of everything that makes winter great in Minnesota, the festival hosts dozens of activities, both traditional and new favorites held over nearly two weeks in January.

The festival was famously created in 1886 after a New York Times reporter who visited St. Paul called it “another Siberia, unfit for human habitation in the winter.” At the time, St. Paul was the country’s fastest growing city and a major rail center. The festival aimed to celebrate the city’s growing importance and prove to the nation that St. Paul truly is a winter wonderland.

Early events included parades, skiing, snowshoeing and a blanket tossing contest. Central to the carnival was its ice palace, made of blocks of ice, and the surrounding toboggan slides. Many traditional events continue today.

“The parades continue to be a favorite event,” said Beth Pinkney, President and CEO of the St. Paul Festival and Heritage Foundation, which produces the St. Paul Winter Carnival. “The King Boreas Grand Day parade helps kick off the carnival, and then the Torchlight parade takes place near the end of the carnival in the evening and features the Vulcan victory.”

“Ice sculptures in Rice Park and the snow sculptures at the Minnesota State Fairgrounds also are long-time favorites,” said Beth. “Visitors can come out and see the sculpting in action at the park, and the sculptures also shine beautifully in the night when they are lit up.”

“Yes, I can’t forget about that!” said Beth. “We’ve had a lot of fun each year with the medallion hunt. Clues are published by the St. Paul Pioneer Press. Don’t forget to register your Winter Carnival button for larger prizes if you find the medallion.”

New to the Carnival is its partnership with Red Bull to host the annual Crashed Ice competition. More than 100,000 people turn out each year to see the combination hockey, boardercross, and skiing on a downhill ice course. The icy track zig zags around the St. Paul Cathedral on the edge of downtown, and each year the event is recorded for national broadcast.

“In recent years we’ve also had a new partnership to host the Beer Dabbler Winter Carnival,” said Beth. “More than 7,500 people come out to taste local craft beers. It’s been a great way to celebrate the local beer industry even in the winter.”

The mix of new and old brings thousands of visitors back to the chilly St. Paul streets year after year.

“The Carnival means a lot to the city,” Beth explained. “It’s about enjoying the winter and the city, but it also leaves a big mark each year. The Carnival draws about 350,000 visitors and leaves a $6 to $10 million economic impact.”

Minnesotans don’t need to hibernate through the winter. At the St. Paul Winter Carnival, they can celebrate all it brings to the state.

“Come out and enjoy it,” said Beth. “About 99 percent of the activities are completely free. It’s a great time to get out and enjoy winter.”