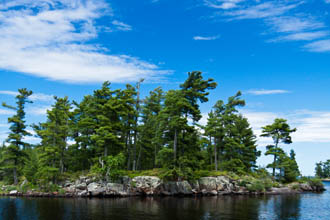 Voyageurs National Park is a
water-based park, dotted with islands. 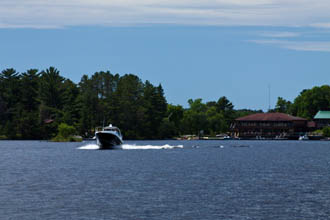 Voyageurs National Park is a top
boating destination in Minnesota. 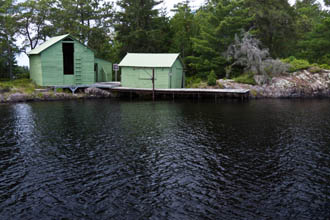 Across the park, 15 historic sites have

been preserved for day use and exploration. 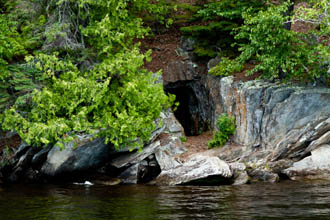 Traveling by boat, there are near endless opportunities to explore at Voyageurs. 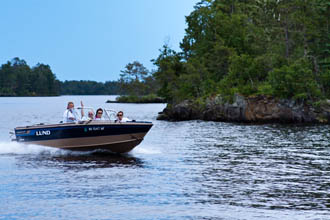 Unlike the nearby Boundary Waters,
Voyageurs allows motorized boats. 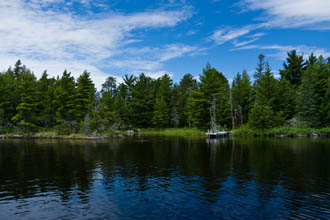 The interconnected waterways are
surrounded by beautiful forest and cliffs. 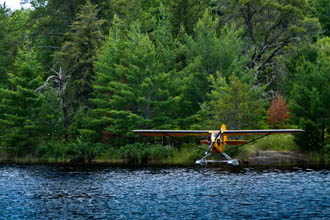 Float planes are not an uncommon
site on this water-based park. 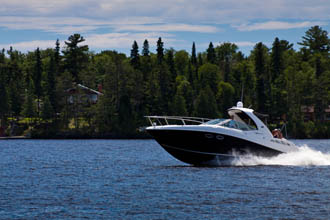 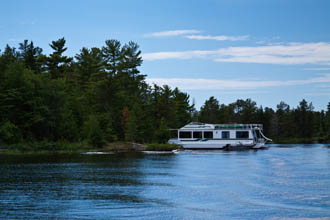 Rent a house boat and enjoy a longer
stay at Voyagers National Park. 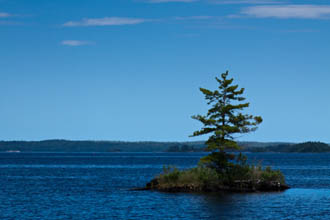 The park consists of more than 30
connected
lakes crossing the international boarder. 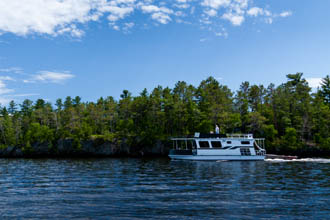 The park now offers more than 200
camping and house boat sites for reservation.

At America’s Water-Based National Park Explore History and Top Recreation: One of the best places to boat in Minnesota is Voyageurs National Park. A Minnesota gem, the park boasts some of the top places to fish in Minnesota, as well as hiking trails, camping and historic areas to explore.

It should come as no surprise that the state that touts its abundance of lakes would offer the nation a water-based park.

There is no road into Voyageurs National Park. Instead, the park – which is comprised of more than 30 lakes – is best explored by boat. One-third of the 218,000 acre park is water, including four major lakes:  Kabetogama Lake, Namakan Lake, Rainy Lake, and Sand Point Lake. The 55-mile-long park contains interconnected waterway totaling nearly 350 square miles of navigable waters, making Voyageurs a destination for boating, canoeing and kayaking.

A Water Paradise
As the sun rises over Rainy Lake, water laps at the shore where a pair of kayakers enters the water and rhythmically paddles off. It isn’t long before a motorboat flies by in the distance. Unlike the nearby Boundary Waters Canoe Area Wilderness, motorized boats are allowed in Voyageurs National Park.

Exploring the park by boat offers days of adventure. In recent years, the park has worked to establish day-use sites, including 15 picnic locations with interpretive exhibits.

“These locations can only be reached by boat,” said Jenna Anderson, park ranger. “Many contain historic structures that are maintained by the park, and we’re also adding picnic sites, walkways and other features.”

“At Little American Island, see the original sites of a gold discovery in 1893,” said Jenna. “This discovery helped touch off a gold rush in the area.”

But if you arrive without a boat, you don’t have to miss the sites. Park visitors can participate in the park’s canoe program and rent a canoe. Or, a number of outfitters and boat rental services are located nearby the park. And several houseboat rentals allow for a longer stay within the park’s boundaries. In fact, Voyageurs offers 200 camping and houseboat sites, many of which can be reserved in advance.

Not surprisingly, the area is a top fishing spot in Minnesota and one of the best national parks for fishing. Anglers seek out the lake for walleye, northern pike, bass, muskie and pan fish. It’s also an ideal location to spot eagles and more than 240 other bird species, black bears and numerous other forest animals from white tailed deer to foxes to otters. The park is also home to timber wolves, and although it’s rare to see them, you may just hear their howl late at night.

In the winter, head to Voyageurs to snowmobile, snowshoe and cross country ski. Many sites are accessible by Voyageur’s ice road. The park also offers winter camping sites.

Early Water Highway: History of Voyageurs
Voyageurs has been a national park since 1975, but evidence of activity in the area dates back more than 10,000 years. The area was first populated by the Ojibwe Indians, who were the primary inhabitants of the area from the 1730s through the early 1900s.

The park is named for the French-Canadian fur traders who used the waterways as a trading highway from the late 1700s to the early 1800s. Driven by the European desire for fashionable fur hats, traders traveled deep into the continent in search of beaver pelts and other furs.

Trade wouldn’t have been possible without the help of Native Americans who had been living in the area for hundreds of years. Serving as guides and trading with the voyageurs, they were an essential backbone of the trade and trapped a significant number of the pelts voyageurs brought back east.

The route became so well-known, that the treaty establishing the international boarder drew the line at the “customary waterway” from Lake Superior to Lake of the Woods.
As fashions changed and the fur trade waned, logging became the major industry in the area. By the 1880s and 1890s, two major companies – International Logging Company and the Virginia and Rainy Lake Lumber Company – operated in the area. Commercial fishing also came to the area in the early 1890s, and production of caviar was common.
Discovery of a small vein of gold in the park in 1893 touched off a gold rush in the area. Little American Island, on Rainy Lake, was the site of gold mining until the bust in 1898.

The idea for a national park in the area was first proposed by the Minnesota legislature in 1891. But it took until 1975 for the park to be established. By that time it was a well-known vacation destination, with more than 60 resorts throughout the park, along with 97 cabins sites and 120 privately owned vacation homes. While some were sold to the park immediately, others have maintained use for a lifetime tenancy, and the park is restoring the land as these sites become available.

Today the park has become a gold mine of a different sort. It is rich in archaeological artifacts.

“We have more than 30,000 objects in our collection,” said Catherine Crawford, collections manager for the park. “Artifacts dating back 10,000 years have been uncovered in the park. In fact, there are more than 220 pre-historic archaeological sites.”

Some of those artifacts can be seen at the park’s Rainy Lake and Kabetogama Lake Visitor Centers.

Voyageur’s National Park: A Minnesota Gem
Visitors to the park today have the opportunity to explore nature and history. Touch some of the oldest rocks of any park in America – older than the Grand Canyon. Travel the park’ s interconnected waterways just as the voyageurs did more than 300 years ago. And see historic sites important to the Native Americans who called the area home for hundreds of years. Visit for top recreation and stay for a relaxing getaway to one of America’s most beautiful natural resources.

If You Go:
Voyageurs National Park is open year round and now offers 200 camping and houseboat sites that can be reserve in advance through the park’s website.
Plan to take a tour of the park’s historic sites, including the gold mine at Little American Island. Reserve a spot on a guided tour. The Rainy Lake and Kabetogama Lake visitor’s centers offers boat tours and guided canoe tours.

Getting There:
Voyageurs National Park is located in northern Minnesota along the Canadian boarder, and west of the Boundary Waters Canoe Area Wilderness. International Falls, MN is a top destination for accessing the park through Rainy Lake.

While You’re There:
Nearby International Falls offers dining, shopping and historic tours if you’re looking for an afternoon of land-based activities. Stop for dinner at She She Resort, accessible by car or boat from Rainy Lake. Visit the Rainy Lake Visitor Center to see interpretive displays and a park film, or head to the Koochiching County Historical Museum to learn about voyageur history and see artifacts dating back hundreds of years.