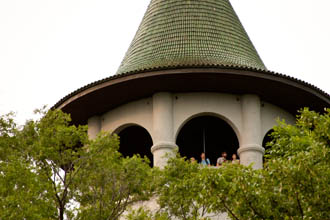 For one night a year, visitors can climb the
Witch’s tower to see panoramic views of Minneapolis. 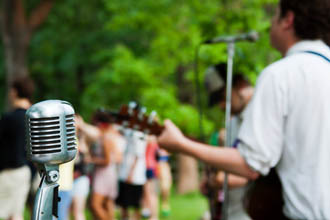 Visitors waiting to climb the tower listen
to live music playing under the tower.

Once inside, visitors climb the winding
metal staircase to the top of the tower.

At the top, see spectacular views of the city and nearby University of Minnesota campus.

Nicknamed the “Witch’s Hat” or “Witch’s Tower” for its distinctive green-shingled, hat-like roof, the tower opens just one day a year for tours and scenic views of downtown Minneapolis and University of Minnesota campus.

The tower was built in the hilly neighborhood in 1913 to improve water pressure for residents, with a capacity of 150,000 gallons of water. It stands on Minneapolis’ tallest point, Tower Hill, and continued to be used as a water tower until 1952. Originally, it was also envisioned to be a band shell, but the difficulty of getting instruments to the top of the tower meant only one concert was ever played in it.

Though it didn’t become a concert destination, it may have gone on it inspire music. It’s rumored that Bob Dylan’s “All Along the Watchtower” was inspired by the tower, which Dylan would have been able to see from his home in the Dinkytown neighborhood of Minneapolis in 1959.

Music returns to the tower hill each spring for the annual Pratt Ice Cream Social, benefitting the nearby Pratt Elementary School. Held the first Friday after Memorial Day each year, the event is the only day of the year when the tower opens to the public for tours.

On the night of the tour, a line snakes across the park as visitors await their turn to climb the winding metal staircase to the top of the tower. Live music, dance and of course, ice cream, are highlights of the festival. The smell of grilling brats and roasted corn fills the air.

Climbing the winding staircase to the top, visitors are struck by the panoramic views. In the distance, downtown Minneapolis glimmers in the sunset, while closer by, the University of Minnesota campus buildings all align in view.

For just one night a year, the city’s panorama comes into view, from the top of the tallest point in town. A celebration of community and history, and a bit of legend, the festival offers a unique opportunity to climb to the top of the Witch’s tower.