When the Harkin Store closed in 1901, many items were left on the shelves, where they remain today. 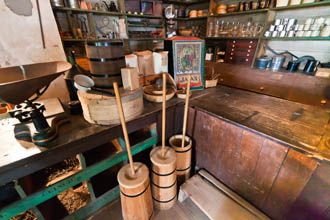 Visitors to the Harkin Store can see authentic 1900s items and learn the history of the town left behind.

Like many small towns of America, when the railroad passed by West Newton, the town declined.

The once vibrant Harkin Store is now open to visitors, who can learn about early life on the MN prairie.

MN Historic Site – New Ulm, Minnesota: As the Civil War ended, railroads began expanding across the country, crisscrossing states and bringing travelers to new locations at speeds once unimagined. Trains had the power to make or break the small towns dotting America’s landscape, even those towns once known as hubs of transportation and business.

In the small town of West Newton, MN, along the Minnesota River near New Ulm, by the 1860s the steamboat was king. The tiny town popped up as a significant stop for river traffic, and around it grew area business, including a hotel, brewery, sawmill, dance hall and a general store/post office operated by Alexander Harkin.

Harkin and his wife Janet immigrated to the area from Scotland and began farming in 1856. Over time, Harkin was elected to posts on the local school board, as well as justice of the peace and postmaster. In 1867 he opened a general store and post office.

By the 1870s, the railroads arrived in the area, and a stop was placed in nearby New Ulm, bypassing the town. Over time, business slowed, though the Harkin store remained open serving the local farming community.

But by the turn of the century, West Newton businesses began to close. Then, the post office declined when free rural delivery was introduced. On Jan. 1, 1901, the Harkin Store and post office closed its doors and the building sat vacant for nearly four decades. The Harkins locked the store and walked away, with much of the contents still intact.

In 1938, the building reopened as a museum, with much of its original merchandise still on the shelves. Today, visitors can tour the original store site.

“Welcome to our store,” said the costumed interpreter as she stood behind the shop counter. “What can I help you with?”

Walking throughout the store, guests can see oil laps, buckets and barrels, spices, jars and china lining the shelves. Nails, screws and other tools are available by the pound, and tonics and medicines fill the several shelves.

Wooden floors creak as the interpreter steps around the counter to help. “Can I tell you more about this area?” she asks, as she describes the history of the steamboat and the growth of the town.

Next door to the general store, visitors can stop into a gift shop, with candy, cards and period-inspired gifts. Outside, walk down to the river to see the original spot where steamboats stopped more than 150 years ago.

Like many small towns, West Newton’s fate was sealed by the railroad. Today, visitors have the unique opportunity to see an authentic general store showcasing life on the Minnesota prairie.

If You Go:
The Harkin store is open Memorial Day through mid-October.  A small admission fee is charged to enter the store and gift shop.

Special events throughout the season include a bluegrass concert, an Independence Day celebration, and the annual “West Newton Day” celebration.

Getting There:
Near New Ulm, MN, take Hwy 15 to Hwy 21. The Harkin Store is eight miles northwest of New Ulm.

While You’re There:
The site is nearby several other Minnesota Historical Society sites, including the Jeffers Petroglyphs, Lower Sioux Agency, Fort Ridgeley, and the Birch Coulee Battlefield. Plan a MN history trip to see them all.