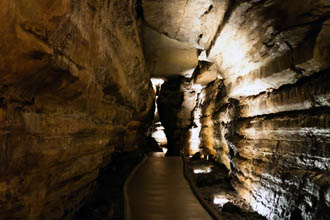 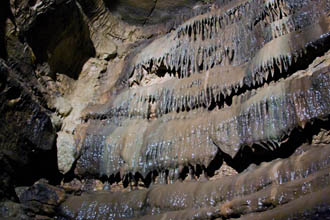 Inside Mystery Cave, water laden with dissolved minerals drips down from the cave walls. 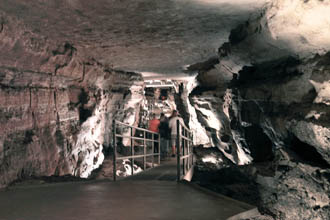 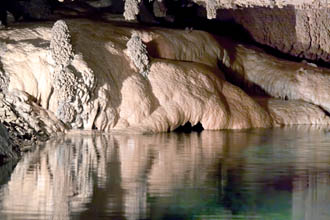 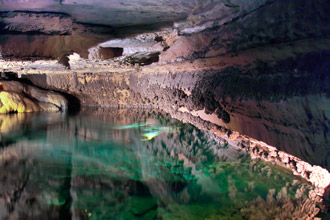 A highlight of Mystery Cave is its bluish
Turquoise Lake, colored by dissolved calcite. 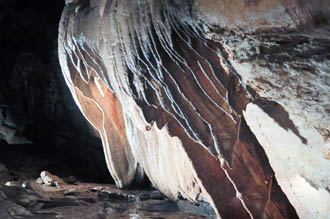 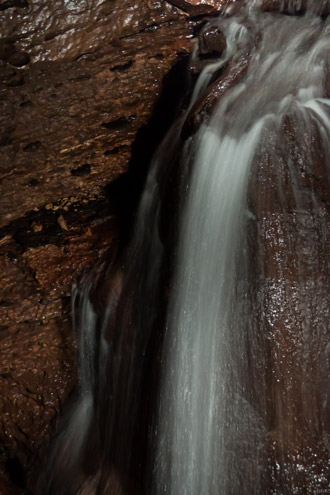 Niagara Cave is named for its rushing
waterfall that drops 60 feet underground. 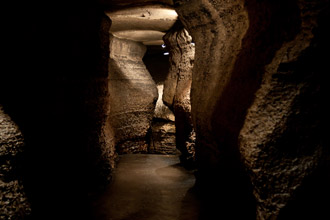 The winding tour takes visitors through
Niagara Cave, which was discovered in 1924. 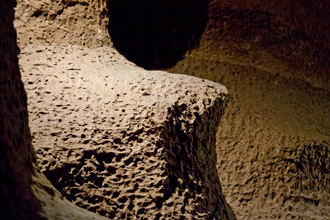 Features within the cave have clever names
like Elephant’s Head, alligator and wishing well. 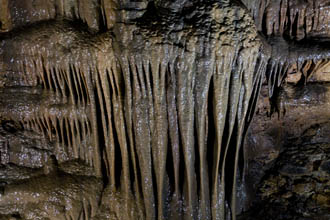 Water flowing into Mystery Cave carries minerals with it, creating finger-like formations along the walls. 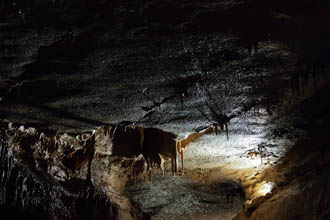 Stalactites hang down from
the ceiling of Mystery Cave. 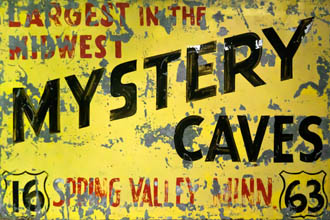 Mystery Cave has been a road-trip stop for
decades, drawing visitors from across the region.

Southeast Minnesota is home to some of the most dramatic and unique landscapes in the state, and one distinct feature below the surface: caves. Just north of the Minnesota-Iowa border are two places where visitors can see Minnesota from the inside: Mystery Cave and Niagara Cave.

Mystery Cave is the appropriate name for Minnesota’s wonder just hours south of the Twin Cities near the Minnesota-Iowa border, in Preston, Minn. At 13 miles long, Mystery Cave is the largest cave in the Upper Midwest, with potentially miles more undiscovered caverns. It was first discovered by farmer Joseph Petty in 1939, and just a year later was opened for tours.

“The cave stays a constant 48 degrees year round,” said tour guide and park naturalist John Olgram. “The temperature helped Joe Petty find the cave. In the winter, he noticed snow covering the ground except in one place. Because he knew caves stayed a constant temperature, he believed there must be a cave below this spot.”

Tours took place until 1942, when a devastating flood washed through the area. It stayed closed during World War II, until a new owner reopened the cave to tours in 1948.

“Naturally, there is no opening in Mystery Cave, so it has flooded throughout history. It will fill up and then drain back down, almost like a bath tub filling up,” said John.

The state acquired the site in 1988 and modernized it, adding accessible walkways and lighting. It’s now part of the 3,000 acre Forestville/Mystery Cave State Park, one of the few state parks with a unique added feature – no mosquitoes!

“Filmore County has no lakes, so there’s no standing water for mosquitoes to reproduce,” said John. “Another reason we don’t have mosquitoes is the bats. We like the bats because they do eat a lot of mosquitoes.”

The cave also helps make the area a prime trout fishing destination. The South Branch of the Root River passes through the cave, cooling the water to an ideal temperature for trout.

“Water downstream sinks underground. Because the cave is 48 degrees, it cools the water, which then leaves the cave,” said John. “This makes the water nice and cold, which the trout need. In the cave, you can actually hear the river as it passes through.”

Visitors to Mystery Cave have the option of two types of tours. A one-hour tour passes through lighted walkways, where visitors see distinctive stalactite and stalagmite formations, and a 12-foot deep pond called Turquoise Lake, which has a bluish color because of dissolved calcite in the water.

For the more adventuresome, a two-hour flashlight tour provides an in-depth focus on cave geology. This more physically-challenging tour follows a section of the cave called Mystery II, which was discovered in 1958 when then owner Mike McDonald pushed his way through a thin section of the original cave wall. The tour winds through more challenging sections and some of the longest walkways in the cave. Key features include the Garden of the Gods, a section with numerous stalactite formations, and Blue Lake, the largest pool in the Mystery Cave system.

For the most daring of visitors, the park offers a “Wild Caving” tour, through undeveloped portions of the cave. Lasting up to three hours, the tour takes visitors through tight curves and winding walkways. Participants – who must be age 13 or older – are outfitted with protective gear and must wear proper boots on this tour.

Nearly 20,000 people visit the cave each year. Tours are available Memorial Day weekend through Labor Day weekend, and Wild Caving tours must be prearranged. Bring a sweater or jacket, because the cave remains a steady 48°F year round.

The Cave Below the Falls: Niagara Cave

When it first opened to public tours, Niagara Cave was one of the most advertised road trip destinations in the country. Located near the Minnesota-Iowa border and about a half hour from Mystery Cave, Niagara Cave is one of the most unique geographical features in the state. As the name would suggest, the centerpiece of this cave’s one-hour guided tour is a 60 foot underground waterfall that cascades among dramatic stalactites and stalagmites.

For a time, Niagara Cave was one of the most heavily advertised tourist attractions in the country, until federal laws in the 1960s placed restrictions on billboards along interstate highways. The cave was discovered in 1924, when three local farm boys lowered themselves into a hole to rescue some lost pigs. After they rescued the pigs, the boys returned to explore the cave. Nearly a decade later, the site was opened for tours and visitors flocked from around the country to tour the cave.

“We don’t really know how old the cave is, exactly,” explained tour guide Aaron. “It’s hard to date something that’s not there.” That is, it’s hard to date when rock was removed to make the cave. Even so, visitors to the cave can see a glimpse of the past. A line of light-colored stone running throughout the cave likely marks a volcano that erupted more than 400 million years ago on Earth. Similar volcanic sediment from the same time period has been found in Norway and Sweden. The cave is also dotted with various types of pre-historic fossils.

Visitors to Niagara Cave will view distinctive stone formations with tourist-friendly names like the Elephant’s Head, the alligator, wishing well, and Paul Bunyan’s bed, as well as an echo chamber. There’s also a small wedding chapel inside the cave for those looking for a unique Minnesota wedding location.

Tours last one hour and run daily from Memorial Day through Labor Day. Like its neighbor, Mystery Cave, Niagara cave is a constant 48°F year round, but cave tours are not handicap accessible.

So many of our state’s distinctive features – like many of our 10,000 lakes and rivers – are marks left behind from the ice age, but one of our most interesting features lies in the one area of the state that was not touched by the last ice age.

Southeast Minnesota is framed by dramatic limestone cliffs and deep river valleys. The region running roughly from Minnesota Highway 56 east lays in what some geologists call the Driftless Area, a 24,000 square mile region that extends into Wisconsin, northeast Iowa and northwest Illinois. During the Ice Age, glaciers rubbed against much of the state’s surface like sandpaper as they advanced, carrying with them rocks and sand, called “drift.” In fact, early glaciers carried some drift to the Southeast, but it was the most recent Ice Age that stopped just shy of the region, leaving its distinct bluffs and valleys exposed.

As the area developed, rainwater seeped into the limestone, mixing with carbon dioxide in the soil to create a weak acid that slowly dissolved the stone. Over thousands of years, caves formed along joints in the rocks. As the caves became exposed, continued rainwater seepage crated stalactites – the icicle-like formations hanging down from the ceiling – and stalagmites – the cone-like features that line the cave floor and poke upward.  Most caves in Minnesota likely formed nearly 400,000 years ago, but continue to be shaped by water even today.

Though limestone isn’t necessary for a cave to form, the rock must be soluble. In the United States, only about 20 percent of the land has “karst” features suitable for cave formation, characterized by soluble rock, and the presence of sinkholes, disappearing streams and caves. It’s common for these areas to have very little, if any, surface water.

Humans have been exploring caves for thousands of years. In Minnesota, Mystery Cave and Niagara Cave remain the only caves open for commercial tours. They offer visitors views of a place that seems nearly foreign, even though it’s just minutes from home.

Weekend tours of Niagara Cave are available April through Memorial Weekend, and again September through October. During the summer, tours are available daily and admission fees apply.

Mystery Cave tours are available for reservation up to 90 days in advance through the Minnesota Department of Natural Resources website or can be reserved at the park. Visitors will need a Minnesota State Parks permit to visit the cave.

Be sure to bring along a jacket – the caves remain 48°F year round. Visitors are not allowed to wear open-toed shoes on the two-hour and wild caving tours at Mystery Cave.

Getting There – Mystery Cave: The park is located just south of Wykoff, Minn. From Minnesota Hwy 16, head south to County Hwy 5, then 2 miles east on County 118.

Visit Historic Forestville an 1890s village now managed by the Minnesota Historical Society. Costumed interpreters portray townspeople as they would have lived more than 100 years ago. The site is open May through October.