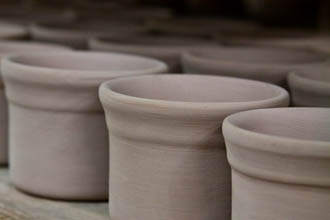 Meticulously handmade Red Wing Stoneware
pottery line the shelves ready to be fired in the kiln.

Red Wing Stoneware uses the same fabrication
techniques that made it famous over 100 years ago..

The iconic “Red Wing” seal is seen on many
pieces of pottery that originate from Red Wing, MN. 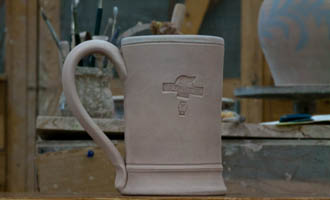 At Red Wing Pottery, traditional wheel-thrown
pottery can be witnessed on site by its three potters.

“You’re not a master potter until you make an entire cart of pottery and it looks like it wasn’t handmade,” said Thomas Woodruff, president of Red Wing Stoneware, of the meticulously made pieces that line the shelves of his Red Wing Stoneware store on the edge of Red Wing, MN.

He pointed to a blue flower design on one glazed bowl. “We’ve stayed true to the original methods the company used to make stoneware, including making our own inks, using the same glaze and continuing many of the styles that make this stoneware popular.”

The quaint town of Red Wing, MN was once the largest stoneware producer in the country. Today, the river town is seeing a resurgence of its rich pottery history.

Red Wing’s pottery heritage dates back to 1861 when local potter Joseph Pohl, a German immigrant, began making bowls, jars and jugs from clay found in the area. Just a few years later, local businessmen realized the opportunity in local pottery and formed Red Wing Stoneware Company in 1877. Within a few years, other competitors formed and the area began to build a national reputation for unique and high quality stoneware.

Pottery remained a significant industry for 90 years. Over the years, the various pottery companies all merged to form Red Wing Union Stoneware, which made its distinctive stoneware until 1936. The industry began to decline when cheaper glass products became popular, and by 1967, labor disputes brought an end to pottery production.  It wasn’t revived until the 1990s, when local potter John Falconer purchased the rights to the Red Wing Stoneware name and the original documents describing the processes and materials. He restarted production and opened a showroom, featuring pottery made by the original four methods of production: hand throwing, slip casting, pressing and jiggering.

Reinventing the Past: Return of Pottery to Red Wing

Today, Red Wing Stoneware continues to make its own ceramic inks and it uses the original pigment formulas first used more than 100 years ago, as well as the distinct 1880s-style “Bristol” glaze. The company employs 18 people at its Red Wing facility, where stoneware continues to be handmade, with one artist per style.

“Our success has been word of mouth,” said Woodruff. “We have a rich heritage, and people continue to search for Red Wing Stoneware and tell others.”

All stoneware is made on site, including custom pieces commemorating centennial celebrations, historic events and other personalized items. Artists continue to use the classic cobalt blue and Red Wing decorations on the pieces.

“Visitors to the store can actually see the stoneware being made, on the days when our artists are here,” said Woodruff.  “They make many of the same designs the company made 100 years ago, like the large crocks and water coolers.”

Visitors can tour the stoneware factory weekdays. Stoneware can be purchased at the Red Wing Stoneware store on Moundview Drive off of Highway 61, at local shops including the Red Wing Pottery store.

Nearby, local Red Wing Pottery continues its wheel-thrown pottery tradition, in much the same way Red Wing Stoneware has. All pieces are handmade and decorated by the company’s three potters who work on site. The company continues to use the traditional salt glaze style, which refers to the process of throwing salt into the kiln when the temperature reaches 2,400°F. At the high temperature, the sodium in the salt combines with the silica in the clay, giving the pottery a distinctive “orange peel” glaze. The salt glaze was the original glaze used by potters in Red Wing during the late 19th century. Red Wing Pottery also makes pottery with a Bristol glaze that was popular among potters in the early 20th century.

The pottery can be purchased at the retail store on West Main Street. In addition to its own brand, the store is also the largest single Fiestaware retailer in the country, one of the most collected brands of dinnerware in the world.

“A great tradition is being carried on today in Red Wing,” said Woodruff. “The revival of these companies has brought pottery back to the town. This is what the town was built on and today it’s once again making Red Wing a destination to shop for pottery.”