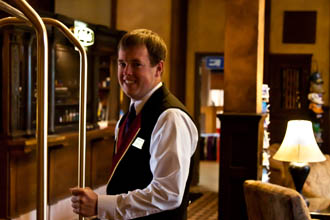 In Duluth, MN check in to the Fitger’s Inn, a
luxury getaway on the shores of Lake Superior. 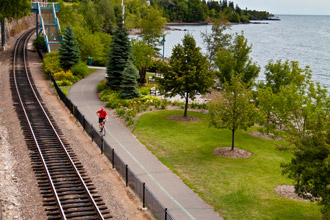 Fitger’s is located along Duluth’s Lakewalk and
the North Shore Scenic Railroad line. 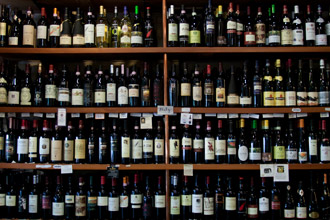 Choose from the wide selection at Fitger’s Wine Cellar.

Trail Fitters is among the shops located
within the Fitger’s complex in Duluth. 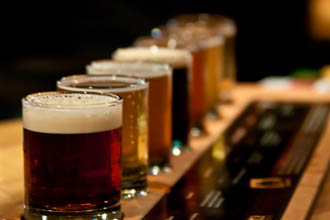 Enjoy a beer tasting at Fitger’s
Brewhouse Brewery and Grille.

Premiere Historic Hotel Carries on Duluth’s Brewery Tradition: In the heart of Duluth, Fitger’s offers a historic luxury getaway on the shore of Lake Superior. The hotel complex includes on-site shopping and dining, as well as one of the top breweries in Duluth’s emerging craft brew industry.

You may think Duluth’s longest continuously operated industry must be related to shipping or mining. In fact, it’s beer.

The site now known as Fitger’s first became a brewery in 1881, when Michael Fink opened Lake Superior Brewery. In addition to the brewery, his facility included staff quarters and a saloon. He soon hired a young German brewer, August Fitger, who became part owner of the brewer. By 1884 the name was changed to A. Fitger & Co. / Lake Superior Brewery.

The brewery continued on for more than 40 years, until Prohibition was passed in 1920. While breweries around the country went out of business, Fitger’s stayed afloat by producing soda and candy, until the law was repealed in 1933. The brewery continued operations until 1972 – totaling 115 consecutive years in business.

Under new ownership, the Fitger’s Brewery Complex was reopened in 1984, and over the years, the site has received significant updates. Fourteen luxury suites were created, along with new dining rooms and access to Duluth’s well-regarded Lakewalk.

The site also re-opened its brewery in 1995 and styled it after the micro-brew scene in Washington, Oregon and Colorado. Today it offers 16 lines of craft beer.

A Night on the Lake Superior Shore

Fully renovated in 2008, Fitger’s Inn stays true to its historic roots. Many of the rooms feature exposed brick walls and views of Lake Superior. Shopping and dining are just steps from your room, connected to the Inn. Try Trail Fitters for outdoor gear, Andi’s clothing and Duluth Kitchen Co during your stay.

If you go:
Plan ahead to reserve a room with a lake view rather than the easier-to-come-by city view rooms. If your schedule’s flexible, book early in the week for the best rates during the popular summer months. Also look for room packages that include discounts to local attractions and dining.

Getting there:
Fitger’s is located just north of Duluth’s Canal Park district on Superior Street, along the Lake Superior shore.

While you’re there:
Fitger’s is centrally located near Duluth’s top destinations. Take the Lakewalk to Canal Park for shopping and dining, or step out downtown. It’s also nearby Spirit Mountain Ski Resort and an easy drive to top dining on Hwy 61.