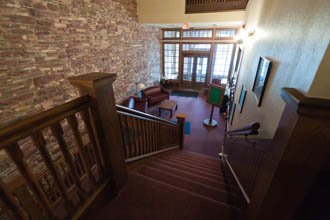 The historic quartzite building is richly
decorated throughout with stone and dark wood. 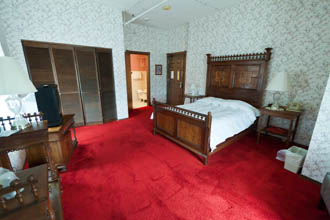 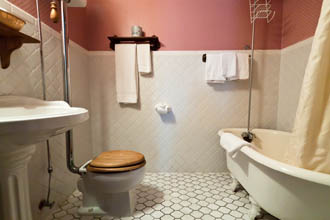 Cozy Inn Celebrates Minnesota’s Prairie History: Across the prairie in the historic town on Pipestone, MN the Historic Calumet Inn brings guests back a century.

The historic Calumet Inn is named after the word French fur traders gave to the ceremonial peace pipes they saw Native Americans using – Calumet – and whose red pipestone is quarried just a mile from the hotel’s site at Pipestone National Monument.

The original hotel in downtown Pipestone, MN was built just a block from the present day Calumet Inn site. In 1886, the wood and brick building was destroyed by fire, and the townspeople rallied for another hotel to be built to serve those arriving by train. Two bankers helped develop the site, with plans for a bank on one end of the hotel.

In 1888, the Calumet Hotel was opened. Built with quartzite, the distinctive building originally offered 50 guest rooms. Over the years, several additions were added to the hotel, bringing the number of guest rooms to 80.

Since then, the hotel has undergone several renovations and today it offers 35 guest rooms, as well as a dining room and lounge, as well as a pub that occupies the original bank site. Each of the rooms is decorated with period furniture, with some featuring claw foot tubs and antiques throughout.

Under new ownership since 2012, the hotel features dining in an on-site dining room and lounge, as well as a pub. Brunch in the dining room has received top reviews from diners.

Over time, the Historic Calumet Inn has seen several revivals, bringing it back to its early beauty. Once again, the hotel aims to provide a relaxing getaway on the historic Minnesota prairie.

If You Go:
Under new ownership since the fall of 2012, the hotel has been updated, with new dining options and renovations to rooms. For families, a five-bed family suite is available.

Getting There:
About three and a half hours southwest of the Twin Cities, take Hwy 212 to Granite Falls, MN. Then take Hwy 23 southwest to Pipestone, MN.

While You’re There:
Don’t miss a trip to Pipestone National Monument, a Minnesota state treasure. Tour the walking site, then stop into the visitor center to see artifacts and watch as Native American craftsmen carve beautiful pipes from the stone. Pipes are available for purchase in the gift store.

Just 30 minutes south, head to Blue Mounds State Park, offering views of the native prairie, including its own buffalo herd.