Enjoy history and recreation on one of the state’s most unique landscapes – the Iron Range. Explore historic mines and museums, and then head outside to see rust-colored cliffs and miles of forests in this region whose iron ore helped drive the country’s industrial rise.

History might highlight the country’s gold rush that led settlers west, but it was also gold that led settlers north, to Lake Vermillion. Since the late 1840s, geologists had explored Northern Minnesota for minerals, including copper and iron ore. Several reports documented rich sources of iron ore, but through 1865, they drew only limited interest and attention. It took accounts of gold and silver at Lake Vermillion in 1865 to spark national attention.

Speculators rushed north, but they never found enough gold to make gold mining viable in the area. What they did find was an area rich in iron ore. They soon set up operations on one of the largest sources of iron ore in the world.

Mining operations drew waves of immigrants to the region, making it one of the most diverse in the state. Its ore fed steel mills that helped build the nation’s cities and drive industrialization. Towns sprung up around the mines, with their locations dictated by where sources of ore were found. In fact, over the years several towns had to be moved when rich ore deposits were found under them, including Eveleth and Gilbert. The northern part of Hibbing was moved in 1910 amid protests from its residents; today, the world’s largest open pit iron ore mine operates on land that was once northern Hibbing.

The region’s history was changed by mining, and it was also mining that helped change the views of a nation in the mid-1980s.  The Iron Range is noted in history as the place where the first class-action sexual harassment lawsuit in the United States was filed. Jenson v. Eveleth Taconite Co. was filed in 1998 on behalf of Lois Jenson and other female workers at the EVTAC mine who faced sexual harassment, threats and other abusive behavior during the late 1970s and early 1980s.

The case was settled in 1998 for $3.5 million, and a fictionalized story of the case was later portrayed in the 2005 Charlize Theron movie, North Country, which was filmed on the Iron Range.

Look out over the world’s largest open pit iron ore
mine at Hull Rust Mahoning mine in Hibbing, MN.

In Hibbing, see the world’s largest open pit iron
ore mine in action at Hull Rust Mahoning mine.

The Greyhound Bus company – and the bus
industry itself – had it start in Hibbing, MN. 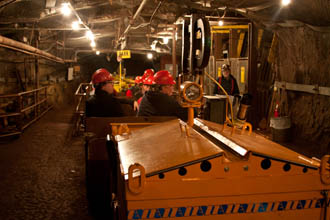 Tours of Soudan Underground Mine include views
of the historic mine and the current physics lab.

In Tower, view historic 1910 trains from the Duluth and Iron Range Railway at the Tower Train Museum.

Hockey greats are remembered at the U.S.
Hockey Hall of Fame Museum in Eveleth, MN.

The Iron Man statue in Chisholmis a tribute to miners who built the area and contributed to building America.

See the Iron Range from atop the look out at Mine View in the Sky, in Virginia, overlooking the Rouchleau mines.

Things to Do on MN’s Iron Range

The Iron Range mixes history and recreation, with something for the whole family to enjoy. Take in the museums and mining sites, and then enjoy miles of trails, fishing, hiking or golf.

Visit an operating mine at Hull Rust Mahoning Mine in Hibbing. Nicknamed the “Grand Canyon of the North,” the mine is the world’s largest open pit iron ore mine at more than two miles long and two miles wide. At the mine’s peak in the 1940s, it produced more than a quarter of the country’s iron ore. Watch miners in action from the visitor center atop a cliff overlooking the mine, where giant mining trucks look like children’s toys as they drive around the mine.

Afterward, stop by the Greyhound Bus Museum, just south of the mine. Founded in Hibbing more than 80 years ago, Greyhound became the first bus line in the country and grew into the largest bus company in America. Also nearby, see the childhood home of music legend Bob Dylan, who grew up in Hibbing.

Tour a historic mine at Soudan Underground Mine State Park just north near Lake Vermillion. Known as the “Cadillac of Mines,” Soudan is the richest source of iron ore in Minnesota and the state’s oldest mine. It’s now also home to a high-tech physics lab operated by the University of Minnesota.

Nearby in Tower, MN visit the Tower Train Museum within the Tower-Soudan Historical Society. See a 1910 Duluth and Iron Range Railway steam locomotive. Inside the museum see historic artifacts from the Tower and Sudan area.

Celebrate our hockey heritage at the U.S. Hockey Hall of Fame Museum in Eveleth. Visit the Great Wall where players, coaches and others inducted into the hall of fame are recognized. Also see one of the first Zamboni’s ever made a vintage ice skating display, Olympic hockey history. A new display celebrates the life of 1980 Olympic hockey coach Herb Brooks, including items from his personal collection that have never been previously displayed.

Nearby, see the World’s Largest Hockey Stick. The stick was built by Christian Brothers Hockey Sticks in Warroad, MN and measures in at 30 feet by 80 feet and five tons. A 700 pound, built-to-scale hockey puck is also included in the display.

Learn about Iron Range history at the Minnesota Discovery Center in Chisholm, the state’s largest museum outside of the Twin Cities. Explore the history of the iron range, including mining history, geology, local immigrant history, depression-area history and other exhibits. The museum also regularly hosts a variety of traveling exhibits. Outside, visit a historic homestead and other local historic homes. Trolley rides are available seasonally, offering a 2.5-mile tour of the former Glen Location mining town, recreated with historic buildings. Afterwards, play mini golf on the museum’s 17-hole course.

Just down the street in Chisholm, see the Iron Man statue, the third largest memorial in the county (only the Statue of Liberty and St. Louis Gateway Arch are larger).

See Iron Range sites from two top lookouts. In Virginia, visit Mine View in the Sky, where you can get up close to mining trucks, while overlooking the Rouchleau group of mines and the surrounding region. West of Eveleth, drive to the top of the Leonidas Overlook where you can see mines and surrounding towns for miles.

Play golf! The region offers some of the top courses in the state, including:

Enjoy recreation, no matter what season it is. The Iron Range is home to one of the most diverse ATV trail terrains in the state. If you enjoy riding an ATV, don’t miss the 1,200-acre Off-Highway Vehicle and ATV Park in Gilbert, the state’s first state recreation area for all types of off-road vehicles.

In the winter, more than 2,000 miles of trails are open to snowmobilers. Or, enjoy cross-country ski and snowshoe trails across the region. Don’t worry if you don’t own your own ATV or snowmobile. Local rentals are available in Gilbert and Biwabik. If you’re staying at Giants Ridge, rentals can be coordinated through the resort.

If you enjoy biking, you’ll enjoy the region’s Mesabi Trail, one of the state’s top paved biking trails. The trail takes riders across Iron Range towns including Hibbing, Chisholm, Mountain Iron, Virginia, Gilbert, Biwabik, the Town of White and Aurora. When fully complete, the trail will connect more than 25 towns between Grand Rapids and Ely.

If you prefer an adventure without wheels, take a hike on more than 175 miles of trails in the region. Birders will enjoy seeing more than 155 species of birds along the trails, along with plenty of other wildlife. 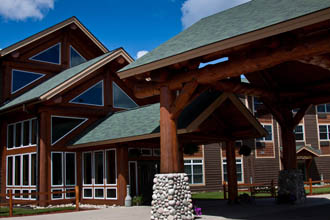 Whether you visit in the summer or winter, Giants Ridge offers several dining options for couples or families.

After an afternoon at the U.S. Hockey Hall of Fame Museum, enjoy a slice of pizza at nearby Poor Gary’s.

Where to Eat in MN’s Iron Range

The Wacootah Grille: At The Quarry golf clubhouse at Giants Ridge, The Wacootah Grille features breakfast, lunch and dinner and a full bar. Look for weekly walleye and rib specials on its recently updated menu. Other favorites include steak, pasta, sandwiches and burgers. Open during the summer months.

Poor Gary’s Pizza: If you’re hungry for pizza after an afternoon at the US Hockey Hall of Fame Museum, stop at Poor Gary’s in Eveleth. The restaurant offers pizza, subs and appetizers.

Mountainside Bar & Grill: In the winter, enjoy homemade pizza, steak, ribs, sandwiches or burgers along the slopes of Giants Ridge.

Timbers Restaurant: Also at Giants Ridge during the winter months, enjoy American-style family dining after a day on the slopes. Sticks Lounge offers a full bar, plus an appetizer and bar menu.

Giants Ridge in Biwabik offers several lodging
options from villas to rooms in the Lodge.

Where to Stay on MN’s Iron Range

Giants Ridge: Enjoy championship golf and trails in the summer, or skiing and snowboarding in the winter at Giants Ridge in Biwabik, MN. The resort boasts two of the state’s top-rated golf courses: The Legend and The Quarry. In the winter, enjoy downhill and cross country skiing, snowshoeing and snowmobiling.

Mitchell-Tappan House Bed & Breakfast: This 1897 home was built for the superintendent of the Oliver Iron Mining Company. The home was among the nearly 200 structures moved between 1919 and 1921 when the town of Hibbing was moved south to open the Hull Rust Mahoning Mine. Today, it offers five king, queen and twin-bed rooms in downtown Hibbing.

Visit the Iron Range in the summer to
enjoy museums and mine tours.

When to Go to the MN Iron Range

In the summer, tour mines, visit museums, play championship golf and enjoy miles of trail. Come back in the winter to enjoy miles of snowmobile trails, downhill and cross country skiing, and of course, some of the best hockey teams in the state.

The 320,000 acres of the Superior National Forest that cross the Iron Range makes the region a top destination to see the fall leaves. Try one of these top drives in the region:

Just 3.5 hours from the Twin Cities, the Iron Range’s many activities will fill a Weekend Away.

The Iron Range is under 3.50 hours north of the Twin Cities. Take Hwy 35 north to the Hwy 33/Cloquet exit and continue north.