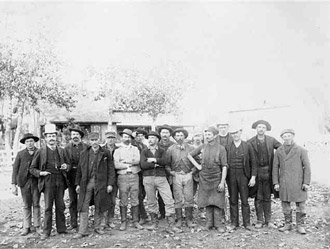 Forestville was settled in 1853 and became a bustling rural town by 1860. Photo Credit: MN Historical Society 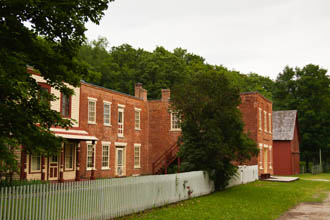 Today, many of the town’s original
buildings still stand and are open for tours. 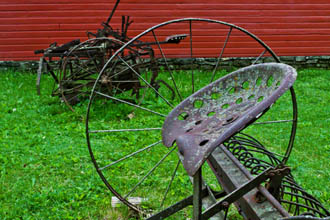 Tools and equipment left behind
are still on the Forestville grounds. 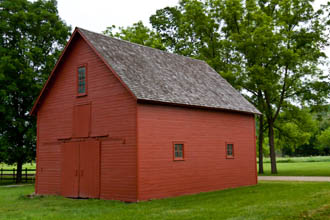 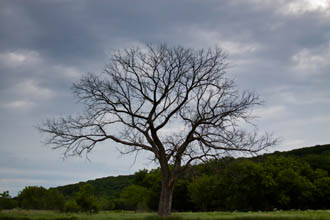 When the railroad passed by
Forestville, the town declined. 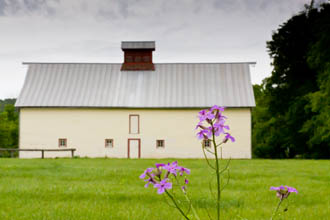 The coming of trains to Minnesota had a profound impact on our history, and visitors to the Historic Forestville at Forestville/Mystery Cave State Park in Spring Valley, MN, can view one city that all but vanished when the railroad arrived.

Walking across the 1899 Carnegie Steel Bridge into the town, visitors to the site today can view real town buildings as they were in the 1890s, with authentic store merchandise dating back to 1910 when it closed. Many of the town’s original trees still exist. Costumed interpreters portray 1890s villagers as they go about their day.

Forestville originally was settled in 1853 along the banks of the Root River. By 1860 it was a bustling rural town, serving as a center of trade for local farmers. Because of the rich soil, local wheat farms flourished and by 1860 the town had 150 residents, along with a school, two sawmills, a gristmill, a blacksmith, a store, two hotels, a distillery and a cabinetry shop serving the local area.

But the Southern Minnesota Railroad’s decision in 1868 to bypass Forestville, MN for other local towns – including Preston, Wykoff and Spring Valley – was all but a death sentence for the town. When the railroad came to Minnesota, stations were placed approximately 10 miles apart, based on the distance a typical farm wagon or person walking would be willing to go to a station. Towns built up on one side of the track, to avoid accidents from people crossing the tracks (hence the phrase, “the wrong side of the tracks”).  Towns on the railroad flourished as centers of trade, while those without access to the railroad declined.

Within a few years, the town was struggling to survive. Thomas Meighton, son of one of the town’s original founders, began purchasing troubled properties, and by 1890 he owned the entire village , including the town store, 1,500 acres of land and all the buildings. It became a “company town,” and residents who remained worked for Meighton and were paid with housing and credit in his store.

Today, the town is part of the 2,000 acre Forestville/Mystery Cave State Park and is operated as a state historic site. It is open to visitors Memorial Day through Labor Day. One-day summer camps allow children to portray a farmer or storekeeper, and experience life in the 1890s.

In addition to the main buildings, pamphlets are available for an interpretive walking tour of the area around the site, with descriptions of where historic buildings were located (note that buildings on extended walking tour are no longer standing).

A picnic shelter with a wood fireplace and restrooms is also available nearby. For a longer stay, bring fishing poles to try for trout in the Root River.

Visit the only two caves in the state that are open for tours – Mystery Cave and Niagara Cave.