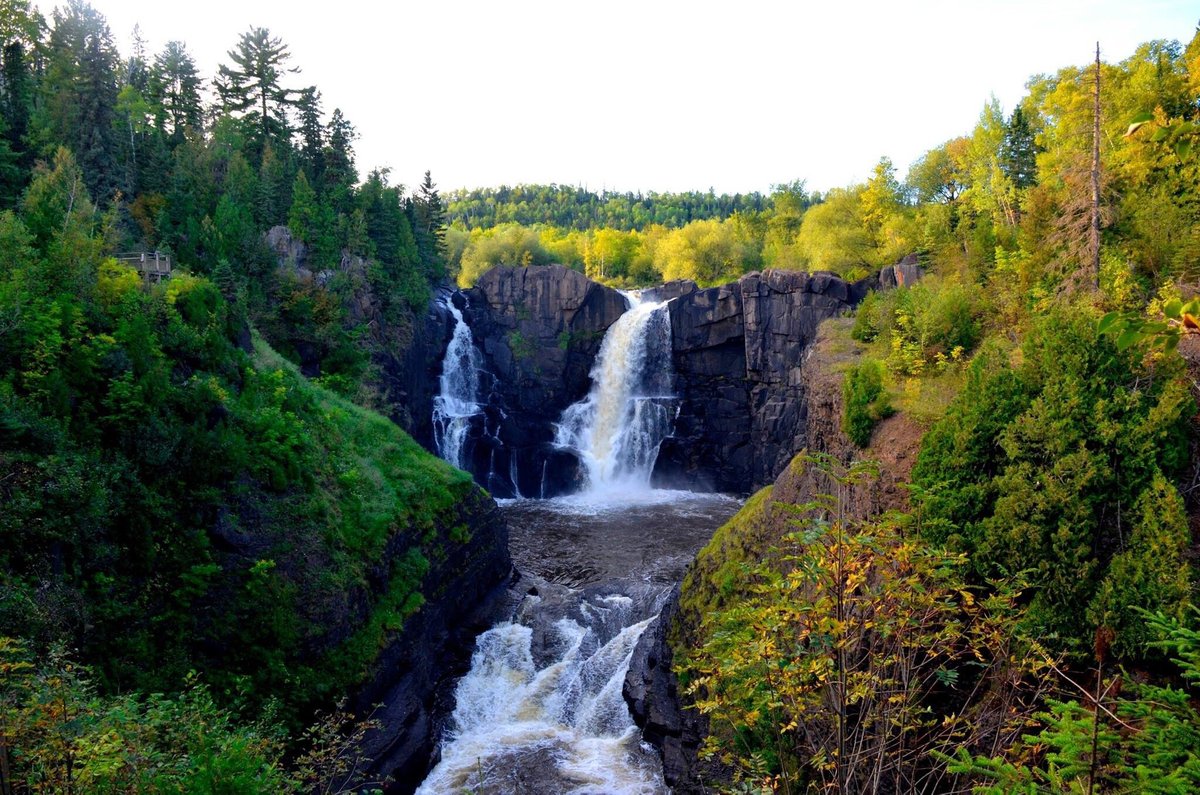 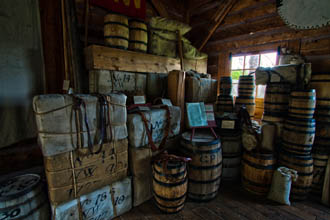 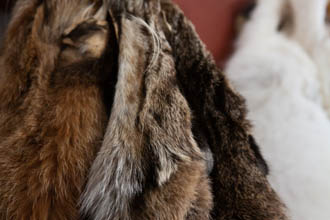 Pelts of Beaver, Fox, and other animals
drove commerical activity at Grand Portage 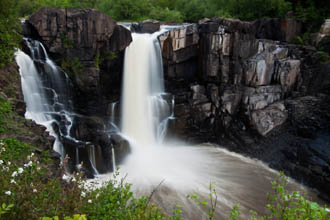 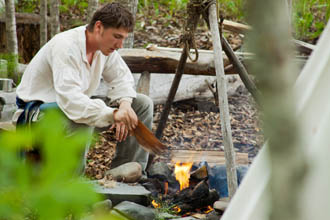 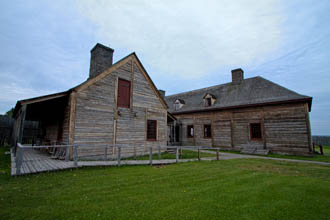 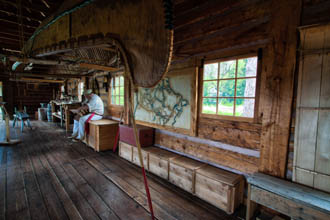 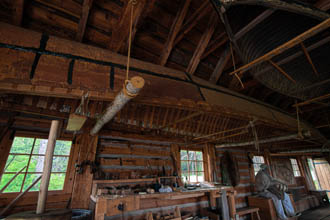 36-foot birch bark canoes – hanging from the
roof – could carry four to five tons of cargo. 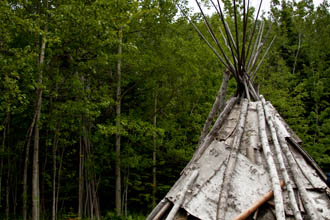 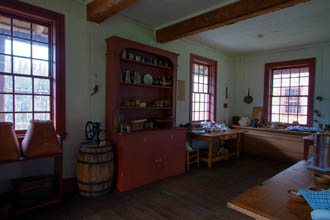 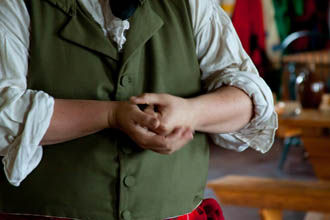 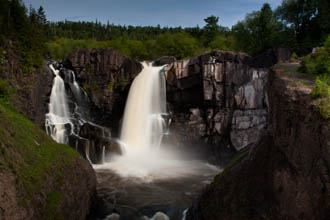 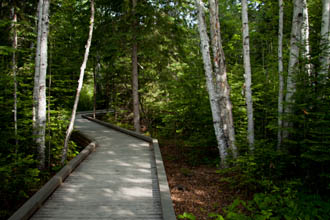 The walkway to the “High Falls” at
Grand Portage State Park

Once a central hub of international trade, Grand Portage was a bustling town as well-known around the world as New York City. Today, the quiet town on the edge of the U.S.-Canadian border has preserved its early history at the Grand Portage National Monument and Grand Portage State Park. Through a reconstructed trading site and stories told through interpreters, visitors today can experience a glimpse of life on the shores of Lake Superior more than 200 years ago.

There are few places in the state today that may look much the same as they did hundreds of years ago. Driving north on Hwy 61 along the North Shore, the closer you drive to Canada, the more remote your destination becomes, lined by tall trees with glimpses of a glittering Lake Superior to the right.

It was through that quiet wilderness that the first voyageurs broke more than 300 years ago. These French traders were made hardy by the Canadian wilderness and their work ethic and eager desire for adventure elevated them to folk heroes in their time.

They first arrived as early as the mid-1600s in search of beaver pelts that would be made into high-end hats in Europe – one of the most sought after luxury items of the time – and other furs. Early voyageurs arrived by canoe, expecting to travel across Lake Superior and into the interior by river. They soon found that the waterway they named the Pigeon River would be impassable by canoe, with a series of waterfalls and rapids in its final 20 miles, including the tallest waterfall in Minnesota today at 120 feet.

Luckily, the wilderness they encountered wasn’t as remote as they thought. The Ojibwe and Cree tribes living in the area became vital partners in unlocking the wilderness and its resources – and shortcuts.

“If it wasn’t for the local Native Americans here, you won’t have the fur trade. They were the interpreters, they were the guides, and they were the people who provided the canoes,” said Sharon Layton, a National Park Service interpreter at Grand Portage National Monument. “Along the road you’ll see a sign that says, The Grand Portage, ‘Gitche Onigaming.’ And that’s what this is all about.”

Native Americans led the voyageurs to the Grand Portage, an 8.5 mile detour by land around the waterfalls and back to the lake. The inland route allowed trade to continue in the area, growing into one of the richest trading sites in the world at the time. It soon became a major hub of the North West Company, a British company and one of the largest fur traders in the world.

Early stages of the fur trade can be traced to the late 1500s, when beaver pelts became popular as material for French felt hats. In fact, the hats were in such demand that the beaver was nearly hunted to extinction in Europe.  By the early 1600s, businessmen were looking to the New World for furs.  In North America, the Hudson’s Bay Company was formed in 1670 and grated a monopoly in the English fur trade.

But 100 years later when the British took over lands in North America from France, a new company was founded: the North West Company. It quickly moved fur trading beyond the great lakes, through a network of voyageurs that pressed further and further west.

To coordinate the complex trading network, the North West Company built the Grand Portage post, including a great hall, kitchen, gardens, canoe warehouse, and rooms for clerks and businessmen who came to trade. Today, many of these buildings have been reconstructed at the Grand Portage National Monument to replicate the original layout of the site’s buildings.

“Grand Portage had two very unique things,” said Karl Koster, a long-time interpreter at Grand Portage, as he worked to carve a handle for a wooden water bucket in the warehouse, dressed in a voyageur outfit. “First, it’s an area rich in spruce, birch and cedar trees. You can find those trees in a lot of places, but to find all three in abundance in one place was pretty rare. With those three trees it was possible to make a near perfect canoe here. You can’t make a lighter canoe – even today – than a birch bark canoe,” he said of the three types of trees needed to make the canoes.

“Besides the trees, we also have the greatest canoe routes in the world here,” Koster said, stepping over to a large map of the region on the wall of the warehouse. “In 1789, the men who ran this fur company paddled from here and became the first to reach the Arctic Ocean,” he said, tracing the route on the map. “In 1793, a group of explorers left from this site and paddled to the Pacific Ocean, reaching it on July 22, 1793. Twelve years later, Lewis and Clark became the second expedition to reach the Pacific.”

Throughout the warehouse are replicas of the canoes that made trade at Grand Portage possible, hanging from the ceiling and leaning on their sides along the floor.

“The voyageurs came in 36-foot birch bark canoes that could carry four to five tons. They would unload those canoes here at Grand Portage,” he explained. “Those large canoes would not work further west, so they would leave the canoes here.  They would then carry two 90-pound bales each along the 8.5 mile portage. On the other side, the fur traders would use 24 or 26-foot canoes, about a ton and a half carrying capacity, as they traveled to 120 outlying posts. They had to get furs down here and out to Montreal, and then they also needed to get the trade goods back up so they could be used to trade for furs.”

For about 25 years, Grand Portage was a major North West Company outpost and the center hub of a network of more than 1,200 traders who arrived each summer to trade, before heading back inland for the winter. They exchanged the beautiful pelts for goods like beads, tobacco, cooking utensils, alcohol and other items from Europe. Those goods arrived from 30 warehouses in London to 30 warehouses in Montreal, where they were placed in 50 to 70 canoes that arrived at Grand Portage each July and August.

A Walk through History

While trading took place in the interior of the country, a Revolutionary War was taking place in the colonies. When war finally ended, it would take nearly 60 years to agree upon the boarders between the newly formed United States and the British-controlled Canada. Grand Portage was a major point of disagreement and it was the last section of the boarder to finally be agreed upon in 1842. In fact, tensions along the border led to concerns that another war could break out between the Americans and the British. In a time before roads or railways, the waterways were a valuable asset.

Soon, fashion changed and materials like wool and silk became more popular for hat making. At the same time, over hunting threatened the trade.  The fur trade declined, and due to disputes over taxes, the North West Company moved its post further north into Canada.

In the mid-1800s the area became the Grand Portage Indian Reservation, but because the trading post was no longer in use, it soon became grown over. It stayed that way until it was finally excavated again in the 1930s. Through a partnership with the Indians, the Grand Portage National Monument was opened in the 1950s to commemorate the region’s history.  Years later, in 1989, 300 acres along the Pigeon River, including the famous 120-foot High Falls that proved impassable for the voyageurs, was designated as a Minnesota State Park. Since that time, the state and the National Park Service have worked with local tribes to preserve the area.

Visitors to the monument can walk through buildings designed to look much like they would have at the peak of the fur trade. A new visitor center at the monument tells the history of the area and the backbreaking work of the voyageurs.

A few miles away at Grand Portage State Park, just a short half-mile walk through the park and visitors can view the state’s largest waterfall from three viewing areas around the falls. Those looking for an adventure can take a more strenuous three mile hike to the smaller Middle Falls. Or, for the most adventurous trip, hike the 8.5 mile (one way) Grand Portage trail, the exact same trail traveled by voyageurs and Native Americans for hundreds of years.

Today, more than 70,000 visitors a year trace the routes traveled by those men who stepped out into the wilderness and built an international trading empire. The area commemorates the history of the explorers that 19th century historian Washington Irving once called the “lords of the lakes and forests,” and their Ojibwe trading partners that were so essential to their success.

If You Go:
The Grand Portage National Monument historic site (including the reconstructed historic buildings) is open seasonally, Memorial weekend through mid-October. The Heritage Center is open year round, but only open during weekdays during the winter months.

While You’re There:
Stay close by in the quaint arts town of Grand Marais, MN, or further up the road at the Naniboujou Lodge.  Grand Marais offers arts, dining, and a variety of festivals and events year round.