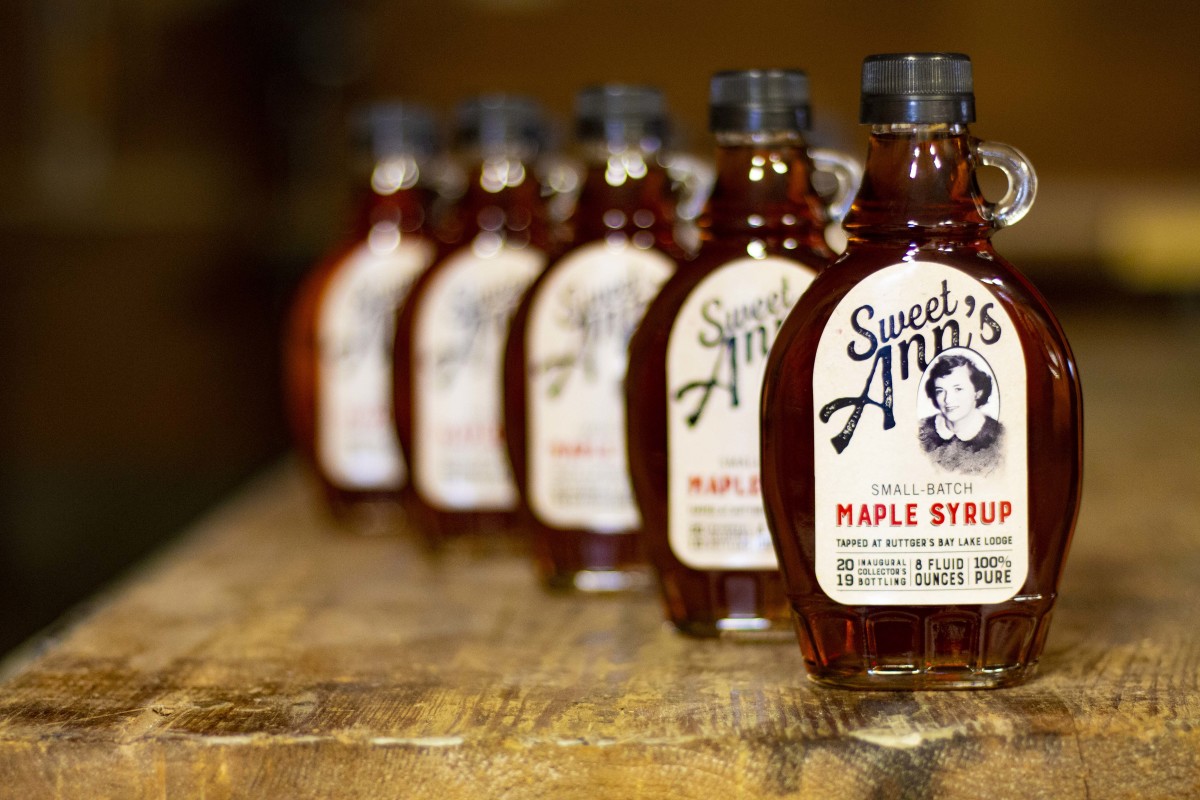 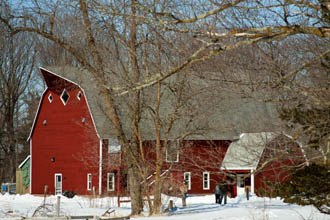 One of the first signs of spring in Minnesota is sugar maple tree tapping and maple syrup production. 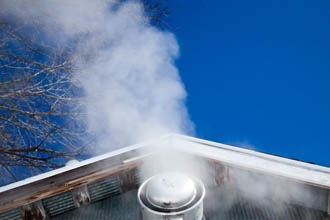 At the Audubon Center of the Northwoods, steam pours from the sugar shack as sap is boiled to make syrup. 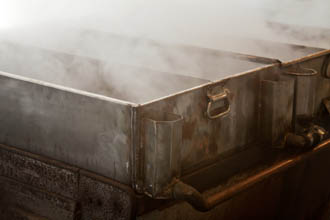 It takes 30-40 gallons of sap to make one gallon of syrup. Maple sap is boiled to remove water to thicken into syrup. 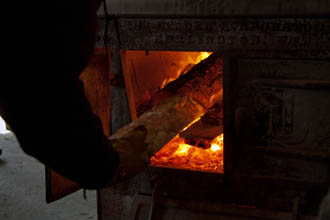 The Sugar Shack at the Audubon Center uses a wood-fired evaporator to boil its sap, something of a rarity. 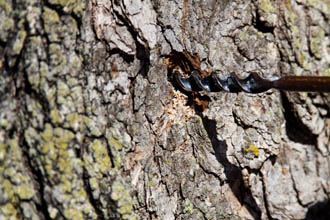 Tapping events allow participants to drill their own tap holes, hammer in a tap and collect sap. 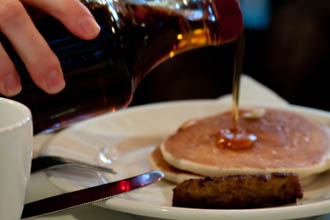 Many tapping events around the state kick off the day with a pancake breakfast – featuring pure maple syrup. 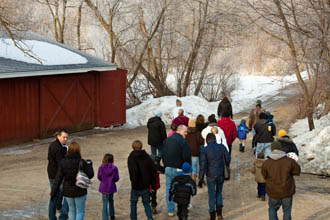 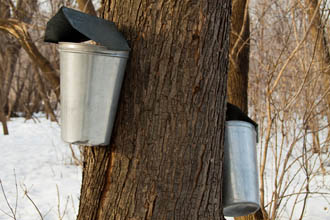 Smaller producers typically use metal sap collecting buckets, while larger ones use piping systems and bags. 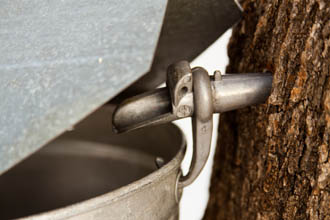 Weather before and during maple syrup season impacts sugar maple sap run rates when a tap is drilled. 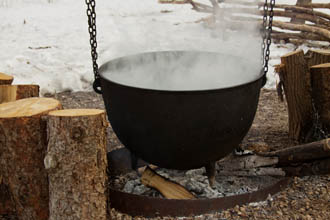 Early settlers used large cauldrons to boil sap over a fire, a process demonstrated at the Dodge Nature Center. 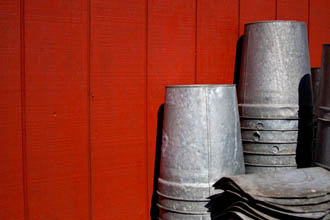 Metal sap collecting buckets are stacked next to the Sugar Shack, awaiting the next round of new taps.

Maple Syrup Season in Minnesota Ushers in The First Signs of Spring: The transition from winter to spring marks the Minnesota pure maple syrup season, when the sweet smell of boiling sugary maple tree sap in the evaporator fills the crisp air. Before the snow melts, before the first flower shoots appear or buds begin to form on the trees, one of the first signs of spring appears when sugar maple tree tapping allows sap to run – making pure maple syrup production possible right here in Minnesota.

At the Audubon Center of the North Woods in Sandstone, MN, a plum of steam pours out of the Sugar Shack, as buckets of pure sugar maple sap are taken in from trees and poured into the evaporator. Each spring, the Audubon Center hosts its Annual Maple Syrup Day, allowing visitors to enjoy a pancake breakfast, and then participate in tree tapping, boiling and other syrup-making activities.

“We’ve tapped about 600 trees,” said Clarissa Eliis-Prudhomme, K-12 Program Director and Naturalist at the Audubon Center as she pointed around the grounds. “The amount produced each year depends on the weather, beginning in the summer and fall. The moisture and weather in the fall, how late the frost reaches the ground and many other factors impact the amount of sap we collect.”

The sap is brought into the sugar house, where it’s boiled down into syrup.

“Typically it takes 30-40 gallons of sap to make one gallon of syrup, depending on how the tress run. A lot of sap to make not very much syrup,” explained Clarissa as several families entered the Shack for a tour. “One way to concentrate it is to cook it, and that’s what we’re doing here. You boil it and evaporate off most of the water until it’s the right consistency.”

The evaporator is constantly watched to ensure it rises to the right temperature, but not too high that the syrup will burn.

“It’s really easy to burn. You have to be really careful. Once you get the evaporator boiling you can’t leave it. If you need to step away for a moment someone needs to watch it,” said Ty Johnson, Building and Grounds Manager at the Audubon Center, who oversees maple syrup making in the Sugar Shack.  “We’ll let it cook a little bit, and then we’ll add in another batch of fresh sap to keep the evaporator full. A hydrometer helps you tell when it’s ready. We need to get it to the boiling point of water, then a few degrees higher – 219 degrees is typically what you need to get to,” he explained, testing the maple syrup.

“To make sugar or hard candy you need to concentrate it even more,” said Clarissa. “You have to boil the sap to a certain temperature, and then will harden when it cools off, like taffy.”

With candies in hand, outside the sugar shack families move along the grounds buildings. One building hosts a maple tree education session, showing guests how to differentiate which trees are capable of producing sugary sap and which ones cannot based on their leaves, branches, bark and other features. Across the grounds, children and adults huddle near sugar maple trees drilling holes and learning to tap.

“You’ll need to push the drill into the tree,” one grandmother said as she helped her two granddaughters tap a tree. “You have to drill just a couple inches. You’re doing it though, the sap is flowing.” They attached a metal bucket and the rhythmic tapping of sap sounded as it flowed from the tree. “That worked up an appetite!”

Outside, tours of the grounds take guests through sugar maple tree tapping and maple syrup boiling.

“You can get sap from any tree but it doesn’t taste good from an oak tree or other tree,” explained the center’s naturalist as she pointed to the trees. The tour group walked along the trails, through the trees and across the grounds to where buckets where hanging from the tress. “We look for trees with the most sugar content, and sugar maple trees have the highest at a 1 to 6 ratio of sugar.”

“We also need to make sure the trees are big enough to be tapped. If we tap a tree that is too small or tap too many holes in a large enough trees it can stress the tree – which we want to avoid. Once we find the trees and measure it for a proper tree diameter, we’ll drill a hole. The sap is clear, and if you were to taste it, it would taste like water, maybe a little sweet, but not much.”

March is an ideal month for tapping trees. As winter ends and spring begins, the days can be warm, but the nights are still below freezing. It’s that freeze and thaw cycle that’s required to get the sap flowing between the tree roots and the branches allowing it to be captured by the freshly tapped trees. But the sugary sap lasts only a few short weeks. Once the buds come out on the trees, maple syrup time is done. It’s then that the sap turns bitter. Depending on the weather, sap production can last a few weeks, or only a few days.

Minnesota is one of the few places in America that can produce maple syrup. It’s that critical freezing and thawing cycle which makes Minnesota and a handful of northern states capable of producing maple syrup. New England, Wisconsin and Michigan are others, though Canada remains the largest maple syrup producer in the world.

Maple syrup production is one of only a few agricultural processes developed in America. When the first settlers arrived in North America, sugar making was already well known among Native Americans. The exact origin of its discovery is unknown. One legend claims a chief was the first to use maple sap to boil venison. Another legend claims Native Americans came across sap running out of a broken maple tree branch and discovered its sweetness.

No matter the origin, maple syrup became a staple for Native Americans. The sap was collected each spring in birch bark buckets. Then it was concentrated using hot stones placed in the sap, or by allowing the sap to freeze at night and taking the top layer of ice off.

At the Dodge Nature Center, birch bark baskets help demonstrate how Native Americans may have boiled the sap, while a large caldron shows how early settlers adapted the process.

“Once the sap is collected, we put it in this big caldron and light a fire under it. Then we cook it, and cook it and cook it. We heat the sap until enough water has been evaporated out by boiling the sap in the caldron. When it’s all done we’ll have thick syrup,” explained the Center’s naturalist. This caldron holds 55 gallons, but once we cook off enough water we might only have a bit more than one gallon of pure maple syrup. That’s because the watery sap has about a 40-1 ratio of sugar to water.

“We cook it and cook it to make maple syrup. Centuries ago when Native Americans first found out about maple syrup, they didn’t have nice kettles. They just used hallowed out logs. They can’t put the log in the fire because it would burn. What they would do is put rocks into the fire and get them really hot. They would use deer antlers and push the rocks into the log. The rocks would be hot enough to evaporate the water.”

The process was a time of celebration for Native Americans because it marked the end of winter and the beginning of spring. It also provided them with the only sugar they had. If they didn’t tap syrup they would have no sugar.

Today, in Minnesota maple syrup season continues to mark a time of celebration of the coming arrival of spring – a season marked by maple tapping events throughout the state.

If You Go:
Nature centers and state parks across the state offer maple syrup events in March. This year’s warm winter makes it more likely that sees lower sap production, so try to go early if you want to participate in tapping. Regardless of the sap collected, hot pancakes and real maple syrup will be served at many events across the state.