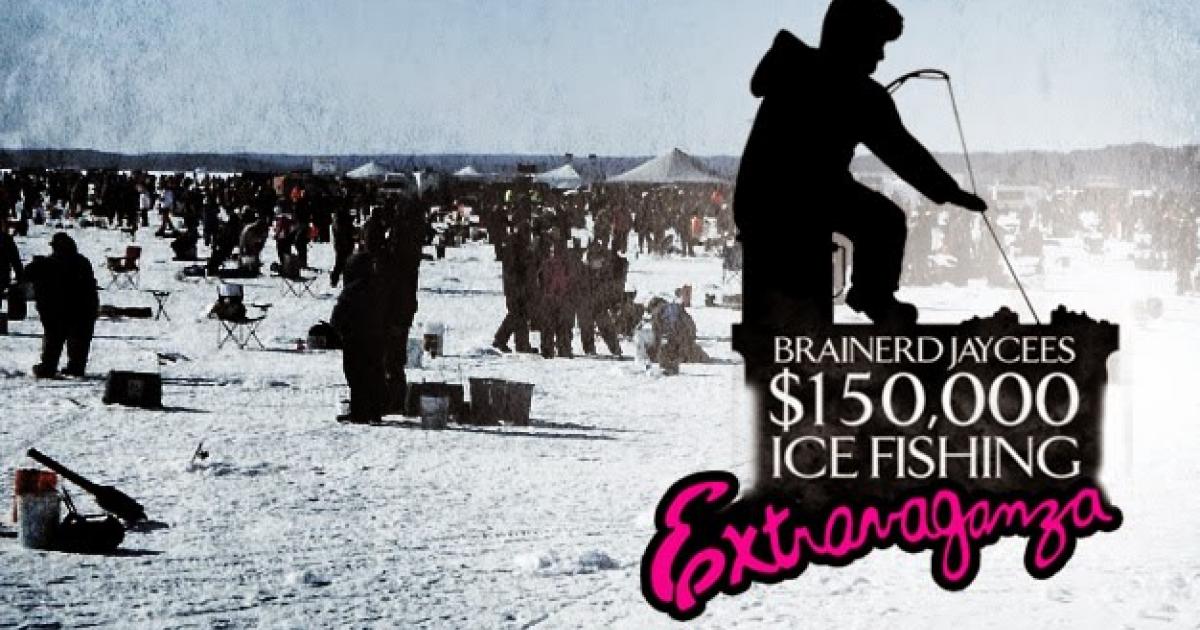 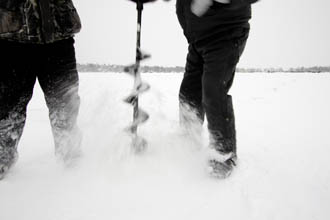 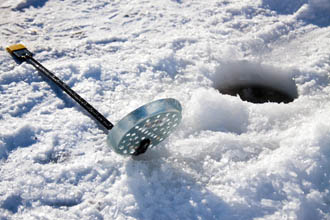 Each ice fishing contestant must bring their own equipment, ice pick and scoop – and a little luck too! 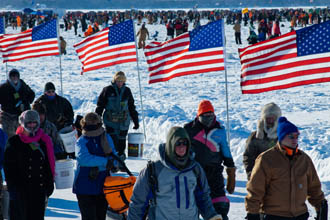 On the ice fishing day, thousands of participants arrive on Gull Lake to find the lucky fishing hole. 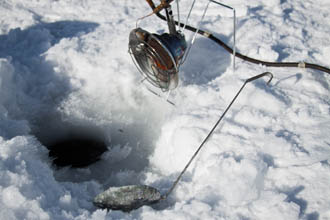 A little heat helps too. Ice fishing contestents can bring equipment to warm their fishing hole to keep it open. 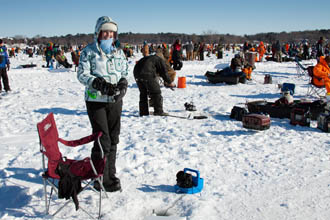 Is it a lucky hole? Over the years the winning fish has been caught all across the ice fishing contest site. 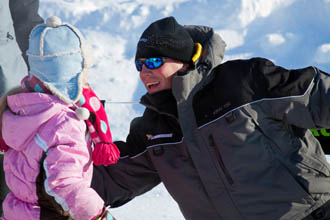 Prior to the ice fishing contest, children can participate in the Ice Olympics to learn ice fishing skills. 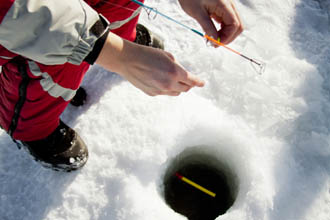 Each fisherman has their own strategy, from selecting a hole spot to choosing a lure and type of bait used. 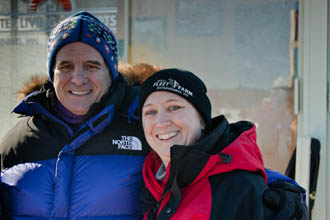 MN Gov. Mark Dayton and Extravaganza Chair Roberta Jay greet participants prior to the
start of the competition. 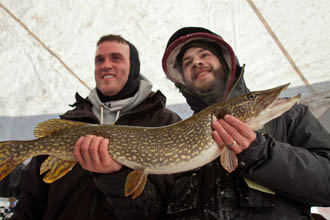 The winning fish – a 7.18 lb. Northern takes top prize and poses for a picture before being placed back in the water by the Recycled Fish team onsite. 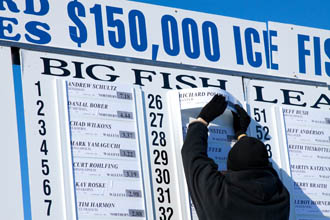 It only takes a few minutes for names to
start appearing on the leaderboard.

More than 12,000 Hooks Drop at World’s Largest Charitable Ice Fishing Contest in Brainerd, MN: In the land of 10,000 lakes, it’s no surprise that we find it hard to stay away from the lakes – even in the winter. It should be no surprise then that Minnesota is also home to the world’s largest charitable ice fishing competition, the Brainerd Jaycees $150,000 Ice Fishing Extravaganza, held each January on Brainerd, MN’s Gull Lake.

“This is tent city here,” said Bruce, a volunteer driver, as he pulled the SUV across the ice and into a small parking area next to a row of tents. It looked like a literal city on ice, with rows of tents, a small parking lot, food stands and shopping areas. People dressed head to toe in blue and red snow pants, jackets, hats and musher gloves scurried about the ice, carrying ice augers, setting up fences and sharing instructions on walkie-talkies. “Tents are set up and we’re now drilling the ice fishing holes. I heard 60 people showed up to help drill the holes.”

Established by the Brainerd Jaycees more than 20 years ago, the annual Brainerd Jaycees Ice Fishing Extravaganza attracts about 12,000 participants and raises more than $200,000 for local charities each year. Over the years, the Minnesota ice fishing competition has raised more than $2.6 million for local charities. A major beneficiary of the event is Confidence Learning center, a local camp for people with disabilities.

“The original intent of the event was to bring dollars into the Brainerd area during a typically slow period, economically speaking,” explained Bob Slaybaugh, program director of Confidence Learning Center. “The aftermath – raising money for charities – wasn’t thought of originally. Once we started making money we thought, what do we do with it? Let’s donate it – 100 percent of it. And that’s what we still do today.”

The event, which has become a regional destination for ice fishers and has attracted growing national and international attention – including distinguished participant Minnesota Gov. Mark Dayton – is completely volunteer organized and run.

“We have over 200 volunteers on the ice,” said Bob. “They are literally volunteers – no one is paid, which is really cool. We put everything together on the ice within two days, but the planning has gone on for eight to nine months.”

“We have a core committee of about 30 people that work on the event nearly year round,” explained Roberta Jay, Extravaganza chair. “We start planning every year in March. We put about 2,000 man hours into the planning, including all of the meetings and logistical details. When event day arrives, we invite 30 different charities to help with parking, busing, security out on the ice, first aid and first responders. All of these people are volunteers and it’s all for charity.”

The day before the ice fishing contest, the ice is buzzing with final preparations – literally. Ice augers whir in and out of the ice, cutting thousands of ice fishing holes. Teams of two cut a hole and then quickly move to the next mark, cutting again as they move across the ice.

“Snowmobiles drive east and west at 50 foot intervals,” explained Bob, pointing to the tracks across the snow. “Everywhere a snowmobile crosses is where they drill an ice fishing hole. It’s roughly at 15 foot intervals. This year we’re drilling 20,000 to 22,000 holes.”

So which one’s the lucky ice fishing hole? “The one I’ll be at with the Governor over on that side,” he laughed, pointing across the ice.

While skill sometimes helps, you don’t have to be an expert – or even have ice fished at all – to participate and win a prize.

“We call the contest the $150,000 Extravaganza, but we’re actually now up to about $190,000 in prizes given away each year,” said Roberta. “You don’t even have to fish to win, you can also buy a raffle ticket and win great prizes, and you don’t need any experience.”

While a good understanding of the lake can help in choosing a lucky spot, it’s not necessarily a guarantee to winning, Roberta explained.

“One year, someone brought out a banjo minnow, which was something they saw on a commercial and bought as a joke. They brought it out here and won,” said Roberta. “There was one woman who decided to come out at the last minute and bought all of her gear on the way out to the lake. She had never fished before and she won. It just shows you don’t need to be an expert to participate. Another person came out here and won $10,000 and they used the money to open a restaurant, which was their dream. They used it as the seed money. Stories like that are always good to hear.”

The next day, the ice is abuzz with activity. By early morning, the first participants arrive on the ice, but the volunteers have been hard at work for hours already. People mill around the ice fishing holes, choosing their spot and setting up their gear.

“At Noon a cannon goes off and fishing begins, the biggest fish wins the day” said Mary Devine, Extravaganza marketing coordinator. “You’ll see 10,000 or 11,000 hooks go in the ice at once – can you imagine what that looks like to the fish?”

But the fish don’t have to worry too much. As many fish as possible that are caught will end up back in the water shortly after they’re weighed in via the competitions cooperation with Recycled Fish.

The excitement builds as it approaches noon.

“You have until 3 p.m. to catch a fish,” said Mary. “People will be running with freshly caught fish to be weighed within seconds of the start. As soon the cannon start goes off people are running to the center camp with their fish to be registered by the officials. Within two to three minutes the line will stretch 150 yards long. It stays that way for an hour and a half. And everyone is so excited as they wait in line to get their fish weighed and registered. Walleye is the winningest fish, though we’ve also had large bass and perch.”

Groups gather around their holes, some with warmers. Some enjoy lunch on the ice as the festive atmosphere builds. Near center ice, children participate in the “Youth Ice Olympics,” a relay-race style competition for children involving about a dozen ice fishing skills, like drilling a hole and scooping ice from the hole. Each child receives $150 in prizes just for participating, though the winners receive an additional cash prize.

Before long, a hush seems to fall over the ice. Exactly at noon, the cannon sounds and hooks drop into the water. As predicted, it just takes minutes before the first anglers rush to the judges tent with fish of all sizes.

An angler rushes to the weighing tent in center ice with a large Northern. It only takes minutes for the leaderboard to fill, with the 7.18 pound Northern leading the way.

“The winning fish may be caught in the first 30 seconds, or it could be caught 10 minutes before the contest ends,” said Roberta. “That’s what makes this day so much fun. You just never know who will walk away with a cash prize or even win a brand new pickup truck. But for the charities who benefit from this even – everyone wins.”

If You Go:
The 23rd Annual Brainerd Jaycees $150,000 Ice Fishing Extravaganza takes place Saturday, January 19 from Noon to 3 p.m. on Gull Lake in Brainerd. Come up for the weekend and plan to participate in the kickoff party at Grand View Lodge, including a beer and wine tasting, appetizers, door prizes and industry demonstrations of products like fishing gear.

Getting There:
The competition is held on Gull Lake’s Hole in the Day Bay, on the northeast side of the lake. Many area hotels offer shuttle service on event day.

While You’re There:
Plan to spend the weekend in the Brainerd Lakes area. Enjoy ice fishing after the contest, great snowmobile routes, dining or relax at one of the areas resorts. While not all resorts are open during the winter months, popular spots like Grand View Lodge and Breezy Point are open year round. Book early – rooms fill fast during Extravaganza weekend.