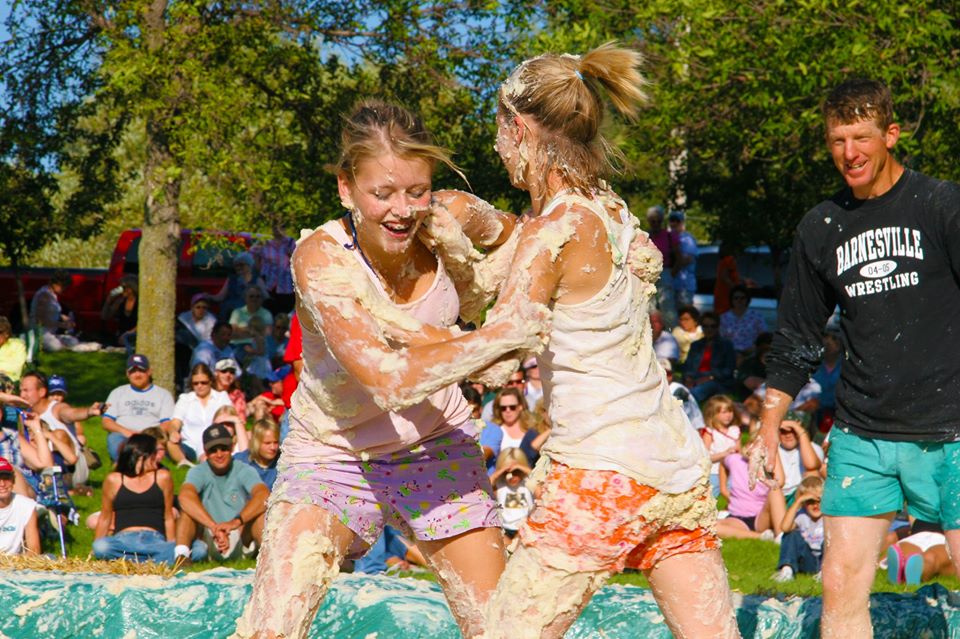 Founded in 1938, Barnesville Potato Days was
revived in 1991 and has run continuously since then.

To celebrate an area staple, Barnesville founded its Potato Days festival in 1938 and it quickly became central to its historic downtown.

Every year in late August, area residents and visitors celebrate the harvest at Barnesville Potato Days. 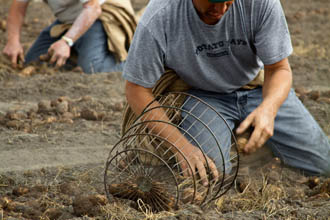 The National Spud Picking Contest has
been central to the Barnesville Potato Days
festival since the very beginning.

To commemorate the area’s history, historic farm implements are on display nearby the festival.

A wooden Spud statue in the center of town commemorates the festival and town’s potato heritage.

Morrie Howland, four-time winner of the
National Lefse Contest, turns a slice of lefse
as it cooks on the griddle.

Jean Olson, the “Lefse Queen”
demonstrates
how she rolls her dough.

A new favorite, the mashed potato wrestling contest, draws crowds as wrestlers splash in the spuds.

Minnesota’s Spud Celebration: Each summer across the state Minnesotans gather to celebrate the symbols of the state – the blueberry and the agate, the wooden boat, raspberries, corn and even Bob Dylan himself. The farm town of Barnesville, MN, population 2,500, draws more than 17,000 visitors each year to celebrate the dinner staple grown across Minnesota’s Red River Valley – the potato – at the annual Potato Days Festival.

“Potato Days Festival dates back to 1938. It was started as a harvest celebration for the area, which is rich in potatoes,” explained Teresa Olson, director of the Potato Days festival. “It’s really become an important tradition for our community, and something we look forward to each year.”

Every year in late August, visitors throughout the region turn out to celebrate one of our favorite foods – by eating it, picking it, tossing it and even wresting in it.

“We have two full days of events,” said Teresa. “More than 55 different activities take place, from a mashed potato eating contest, a peeling contest, a fashion show, an art and crafts fair, a picking contest and potato wresting. Our contests are open to everyone. Don’t be afraid to try!”

Many of the festival’s favorite activities date back to its very beginnings, nearly 75 years ago.

Potato Days was first conceived in the spring of 1938, to celebrate the vegetable grown by farms throughout the area. Created by the Barnesville Booster Club, area volunteers determined that a potato picking contest would be central to the festival – the National Spud Picking Contest. Politics was also central to the schedule – a competitive Governor’s race led event coordinators to invite candidates Elmer Benson, Harold Stassen and Thomas Gallagher to speak, along with other local candidates.

Quickly, the festival took shape. Potato soup would be served free of charge, and a potato sack fashion show featuring local businessmen would highlight the schedule, with potato sack vests, coats and even pants. Not only did local businessmen wear the sack-clothes during the festival, but they were required to wear their homemade fashions for up to 10 days before or face a “fine” by spending time in the “stocks” at the center of town.

That year the festival kicked off with parades, bands, a drum and bugle corps, and of course – potato soup. On Sept. 5, 1938, the first potato picking contest took place, with a winning weight of 25.5 lbs of potatoes, picked in just 38 minutes. Nearly 3,000 people turned out to watch the picking contest.

The festival continued to be celebrated until 1957, but fell away until it was revived in 1991. Once it came back, many of the traditional events and contests were revived, including the National Spud Picking Contest, and another national event, the National Lefse Cookoff.

Lining the streets outside the festival, historic farm implements hint at the festival’s history and the importance of potatoes to the region. Just down the street, the smell of warm potato soup drifts from the American Legion building, a favorite festival tradition that continues today.

The festivities kick off with a kids’ parade, and soon the streets are buzzing with visitors and vendors setting up shop up and down the historic streets. Permanent carvings of the festival’s logo in the sidewalk, and a wooden Spud statue demonstrate the importance of the days’ events to the city year-round.

Soon the street fair kicks off. Artisans and craft makers line the streets. The smell of fresh French fries fills the air as crowds begin to form.

“Visitors can eat at least a dozen different types of potato snacks. We have potato dumplings, French fries, mashed potatoes, lefse. There’s something for everyone.”

On one end of the street, the buzzing chainsaws of wood carvers rings out. At the center of the festival, bands begin to play.

“One of my favorite events is the Grand Parade, which takes place on Saturday,” said Teresa, “and also the mashed potato wresting contest. It’s a newer event, and it’s become quite a sight to watch.”

Unique events like this have helped draw national attention for the area over the years.

“The Food Network has visited a few times. We’ve even held a potato sack race with the Ellen Degeneres show,” said Teresa.

Just down the street in the kitchens at Assumption Church, another recently added event draws crowds: the National Lefse Contest. Open to 10 contestants each year, the event has drawn some of the best lefse makers in the region.

“The lefse contest has become a Potato Days favorite,” said Mary Ann Scheffler, contest coordinator. “The contest is open to 10 entrants each year, and each has their own secret recipe. Over the years, I’ve heard of contestants using just about every combination of ingredients – different types of potatoes, potato flakes, different styles of mixing and rolling.”

As spectators begin to gather outside the kitchens, chefs arrive with tools and ingredients, setting up at one of the 10 stations.

“Chefs have one hour to prepare their lefse, then they select one piece for judging,” said Mary Ann. “Three judges rate each entry on taste, appearance and texture.”

Each must bring their own griddle for cooking. Beyond the equipment, many have their own tricks to making the best lefse, from their rolling techniques to how the dough is mixed – though few contestants will admit it.

“Secrets? I don’t have secrets,” said Morrie Howland, the 91-year-old four-time winner of the contest. “If anyone wants to know my recipe, I’ll tell them,” he said with a twinkle in his eye. It’s hard to believe you could truly make lefse as good as Morrie’s carefully made piece. He presses the circular dough, ready to roll it.

“Everyone is different, “he said, “whatever works for you works.”

“Making a good piece comes with experience,” said Jean Olson, nicknamed the “Lefse Queen” by her friends in Deerwood, Minn. “The secret is to get the piece as thin as possible. It’s not something you’ll pick up the first time you make lefse, but you’ll learn it.”

Soon the cooking begins. Spectators watch and munch samples of lefse as they await judging.

“Lefse is a Minnesota tradition. We couldn’t celebrate the potato without having lefse, and there’s no place better to hold the National Lefse Contest than Minnesota,” said Mary Ann.

Later in the day outside of the church, the sloppy mashed potato “pool” awaits the first wrestling contestants. Families stroll by munching on potato treats, many of the traditional treats served 75 years ago at the festival. As the smell of potatoes fills the air, tradition continues in the small Minnesota town that puts on a big potato celebration each year.

If You Go:
Barnesville Potato Days takes place in late August each summer, with events throughout downtown Barnesville. In addition to the festival activities, a large antique car show is held Saturday near downtown.

Barnesville is just 30 minutes southeast of Fargo and 2.5 hours northwest of St. Cloud, off of Hwy 94.

Stay the night at Thumper Pond resort near Ottertail Lake. Enjoy golf, a water park, dining and nearby lakes.