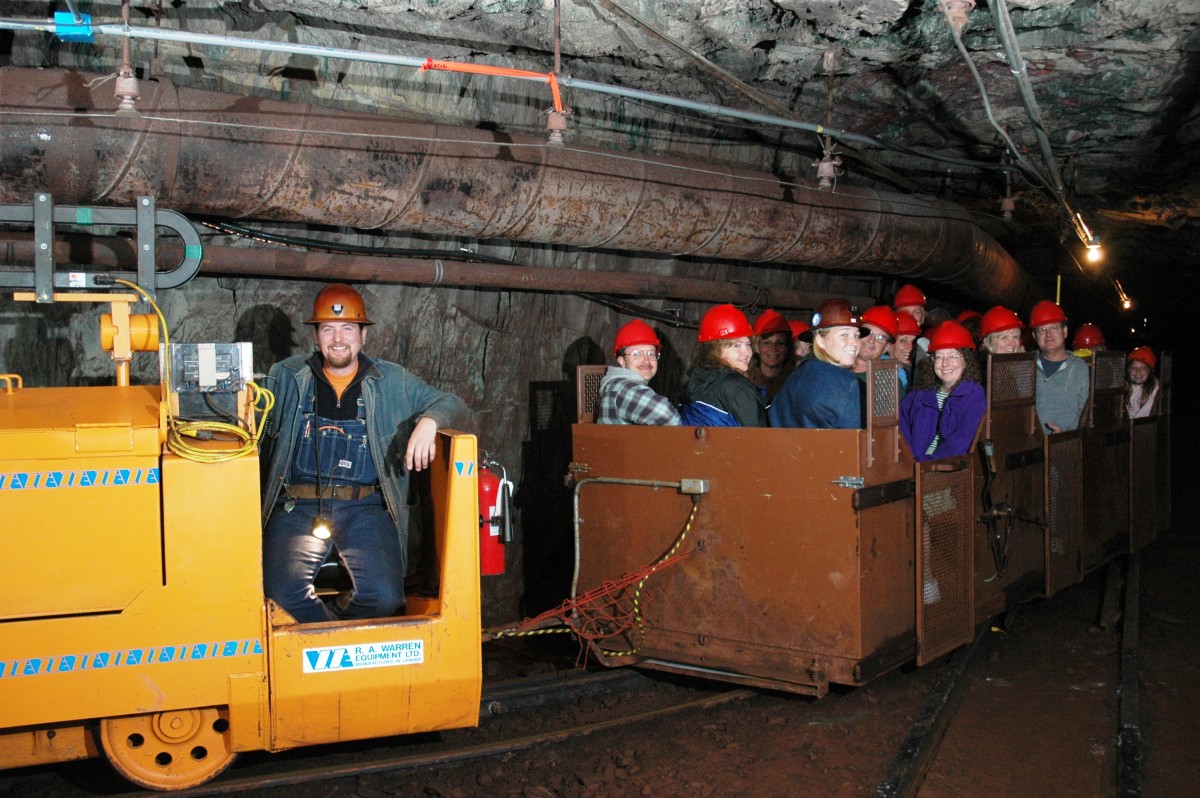 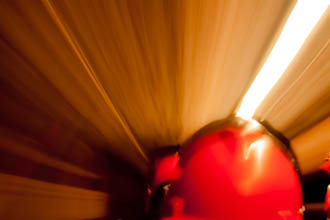 Guests on the historic mine tour
ride the mine cart into the mine. 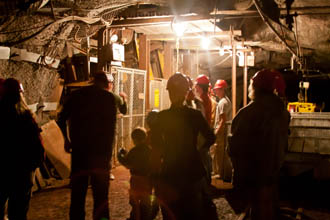 Tour participants await other
guests riding down the mine’s elevator. 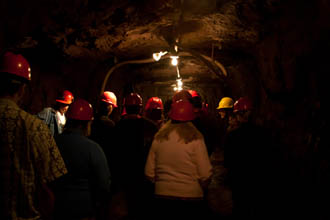 The historic tour takes visitors
through former mine shafts. 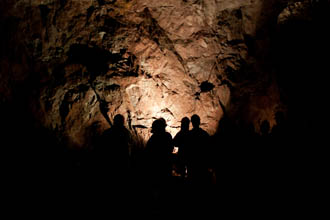 Inside the historic mine, guests experience the darkness the miners worked in decades ago. 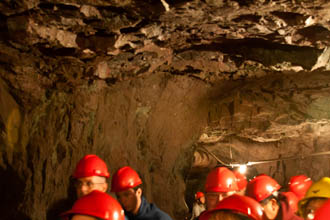 The rusty walls of the Soudan Underground Mine were carved decades ago more than 2,400 ft below ground. 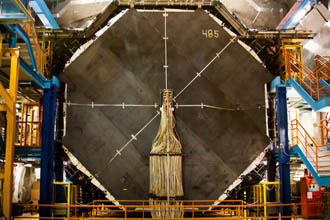 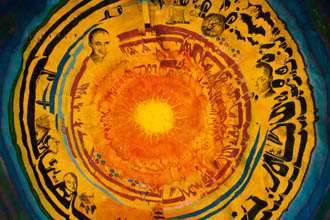 A colorful mural on the lab’s wall depicts
neutrino science and its leading experts. 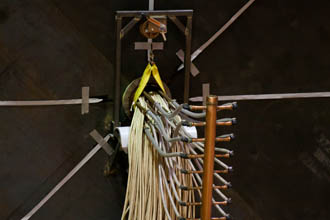 Plates in the lab are designed to detect particles beamed from the Fermi National Accelerator
Laboratory (Fermilab) near Chicago. 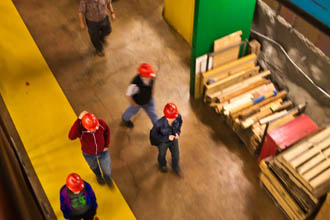 Tour guests walk throughout the mine, viewing
high tech equipment that is helping advance understanding of how the universe developed.

A Piece of Minnesota’s History Aids Our High Tech Future: Nearly 2,400 feet below ground sits juxtaposed views of Minnesota’s history and the scientific research that could guide our future. Soudan Underground Mine State Park provides visitors a tour of a century old historic mine, and a glimpse of a unique and ideal shelter for delicate physics research led by the University of Minnesota.

The rickety cage ride down a dark shaft marking the beginning of the tour lasts just a few minutes, but when you get to the bottom, you’ll step into Minnesota’s mining history, much like it looked a century ago.

“We take tours to the 27th level, the deepest level of the mine. This is where miners were working when the mine closed,” said Dan, tour guide on the historic tour, one of two tours offered at Soudan Underground Mine.

“The whole ride will take us about three minutes to get to the bottom. On the way down, you’ll notice your ears popping, just like they do in an airplane or elevator.” Stepping out of the cage visitors see that today the mine looks much the same as when active mine operations ended in 1962. Just inside the mine, visitors get in a rail car that will wind them through dark tunnels, into the last spot worked in the mine.

“In the late 1800s, there were numerous attempts to find minerals in the area,” explained Dan. “In 1865, miners thought they found gold in the area. The resulting gold rush helped open up the trail to the area, named the Vermillion trail. While the miners didn’t have much luck finding gold, they did find iron ore. In fact, it was the richest source of iron ore in the world at the time.”

Immigrants looking for a better life came to the area to mine what began as open pit mines. Due to safety concerns, mining was moved underground. Nicknamed the Cadillac of underground mines, Soudan was in operation from 1882 to 1962. Over the years, 54 miles of tunnels were dug 2,350 feet deep, and more than 15.5 million tons of ore were mined.

Tours show visitors actual mine settings and the various equipment used over the decades the mine was operation, from candles to headlights, chisels to jackhammers.

“Physics at Soudan has been going on a lot longer than people realize,” said Matt, guide for the lab tour. “It all started in the 1980s when University of Minnesota Professor Marvin Marshack went on the historic mine tour – the same tour still given today. Professor Marshack thought the mine would be a great place to build a lab to complete his physics experiments.”

Soudan was an ideal location because its solid rock would shield sensitive equipment from cosmic rays that normally would interfere with experiments on the surface. But it wasn’t easy to turn Professor Marshack’s vision into reality. “There’s only one way in and out of this mine. That meant all the rock that needed to be removed to build the lab had to be brought up through the mine shaft,” said Matt. “It took 17,000 trips moving six tons of rock at a time to complete the excavation for the lab. Then, the equipment needed to be moved in. It took two years to build the lab.”

Today, the lab is studying neutrino interaction in conjunction with Fermilab, a government lab outside of Chicago. Fermilab shoots off the neutrinos and Soudan’s lab detects them. “It’s like Fermilab taking the before picture, while we take the after picture.”

“Fermilab shoots off 30 trillion neutrinos every 2.5 seconds, and they take just 2.5 milliseconds to get here in Soudan. We’re hoping a few – just two or three a day – hit the detectors here, which sets off a neuron, a key to our research here.”

The experiments are helping researchers better understand some of the building blocks of our universe.

“What we see – what’s visible to our eyes – is just a small fraction of what makes up our enormously complex universe.”

Soudan Underground Mine offers 90 minute historic mine and physics lab tours daily from Memorial Day through Labor Day. Limited tours are offered in September and October. There is a modest tiered admission fee for adults, children age 5-12 and free for children under age 5. Minnesota State Park vehicle permits are not required to enter the park.

Remember to bring a jacket – the mine is 51 degrees year round. Sturdy shoes, like sneakers or boots, are also recommended, especially for the historic tour.

The park is located off of Highway 169 in Soudan, two miles east of Tower on the shore of Lake Vermillion.

Find great golfing in the area at Giant’s Ridge Golf & Ski Resort, 25 miles south in Biwabik. The resorts two courses, The Quarry and The Legend, are annually ranked among the top public courses in the state by Golf Digest. Come back in the winter for downhill skiing, snowshoeing, tubing and a relaxing spa.

To the west, The Wilderness at Fortune Bay is rated among the top golf courses in the country by Golf Digest, Golf Week and Golf Word. Offering spectacular wooded views and challenging holes, as well as four sets of tees for players of varying levels. Afterwards, relax a The Wilderness Grill, or the Fortune Bay casino.

On nearby Lake Vermillion, make a reservation at Ludlow’s Island Resort to stay the night in a “tree house.” The resort’s Dreamcatcher cabin, designed in 2000, is built on four vertical levels with a rooftop deck, giving guests the feeling of staying the night in the trees. The 40,000-acre Lake Vermillion offers some of the best fishing in the state, especially for walleye, northern pike and muskellunge. Hire a guide for a day-long adventure.