Racers take off on their way to the
finish line in downtown Mora, Minnesota.

Medals await Vasaloppet competitors
as they cross the finish line.

The Vasaloppet takes skiers from MN’s Knife
Lake, through winding trails to Mora. 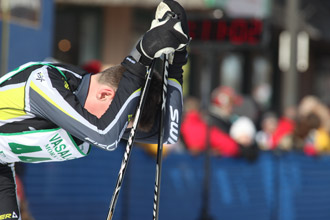 A Vasaloppet skier catches his breath
after crossing the finish line.

Skis line the grown awaiting the start of the race.

Celebrating Skiing and Community: Each winter, the small town of Mora, MN hosts a big event – The Vasaloppet, one of the nation’s premier cross-country ski racing events, named after a popular race in Sweden. Held annually in February, The Vasaloppet attracts 3,000 competitive and casual skiers from the region and beyond to compete in the 17 mile race to downtown Mora, MN.

Cross-country skiing was introduced to North American in the 1850s by Norwegian and Swedish immigrants, so it’s no surprise that Minnesota – with its strong Scandinavian heritage – would be home to a significant population of cross-country ski lovers. It was those fans that helped bring the Vasaloppet to the state.

“The race started in 1972 as part of a ski club,” said Wade Weber, Vasaloppet board member. “Glenn Johnstone was the early founder. He envisioned a race like the one that takes place in our sister city of Mora, Sweden. More than just a small party, Johnstone wanted to do something bigger. Within a decade, the vision came into reality.”

The race became a more serious event that today attracts 3,000 skiers annually and is supported by more than 700 volunteers who help coordinate a weekend of events.

“The first race involved just 96 racers competing on a 3km loop,” said Weber. “The race took place in a field. It would be pretty primitive compared to today’s race.”

By the late 1980s, the race was growing, and the trail finish line was moved into downtown Mora. Today, the race starts 17 miles north of downtown and ends in the streets of Mora. Each year, city crews push snow back onto the street to allow racers to cross the finish line through downtown.

A Race to Town

Depending on snow conditions, the race course could change from year to year. But the ideal course will take skiers from Knife Lake to the finish line in downtown Mora.

“Each race draws a group of elite skiers who come to race and win. Most participants, though, are touring skiers, the weekend warrior types. They’re serious skiers but just not elite,” said Wade. “Then we also have some skiers who just turn out for the day and are more casual skiers. But they turn out and enjoy it.”

While the majority of participants come from the Twin Cities metro area, western Wisconsin, or Duluth and other Northern Minnesota cities, a number of racers come from Michigan and as far away as Alaska, Sweden and Switzerland. Several years ago skiers from Russia and Japan participated.

During race weekend, events begin on Thursday evening, with a volunteer appreciation event, and placement of snow on the city’s streets on Friday. That evening, the whole community enjoys a celebration featuring live radio theatre; a “Vasaloppet Companion” stage show modeled after the popular public radio program and is a highlight for visitors. Saturday’s events include a Ski for the Cure charity race and a 5K tour, prior to the major races on Sunday. The weekend-long events help build community among the racers.

“Community is important,” said Wade. “There are many other winter sports, but cross-country skiing is about community. It’s traditional, focused on being outdoors. And it’s a lifetime sport that keeps you healthy into older ages. Some skiers are still involved even at age 80 or age 90.”

Children are also encouraged to get involved. The Mini Loppet race attracts 300-400 kid skiers each year.

The Race Goes On

On race day, competitors and casual skiers alike gear up to ski toward town. The Vasaloppet features five races.

“The 58 is the signature race, attracting our elite skiers,” said Wade. “Then we have a 35 km that most of our participants race. There’s a 42 km, as well as a 13 km race. We even have a five-person relay that competes on the 58 km course.”

As skiers take off toward town, they navigate road crossings to the cheer of spectators lining the course. The crowds grow as the racers approach town.

“It usually takes 30 to 45 minutes for the first racers, who are competing in the 13 km race, to reach town,” said Wade. “The crowd doesn’t have to wait long before the first winners cross the finish line.”

Just 30 minutes later and the first skiers are approaching the snow-lined streets of Mora and the roaring cheers grow, finishing another year of racing and celebration of community.

If You Go:
The Vasaloppet takes place in Mora, MN in early February of each year. Depending on snow conditions, the race may need to be moved, so check ahead for race conditions and times.

Plan to enjoy a weekend of fun by visiting the community gathering and Friday’s annual snow placement on the city streets.

Getting There:
Mora is just an hour and a half north of the Twin Cities taking Hwy 35.