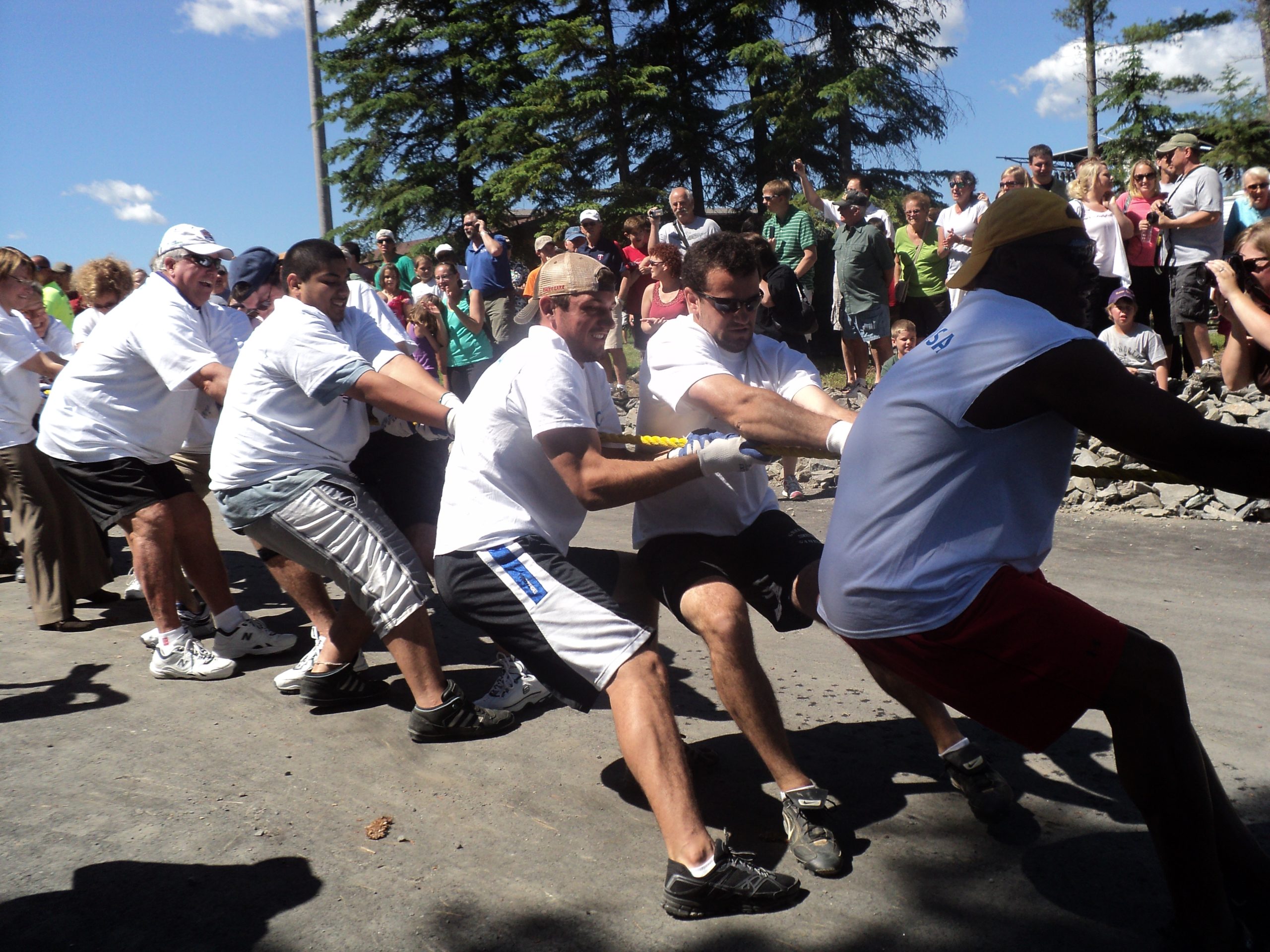 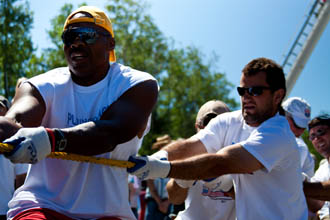 Celebrities like former Minnesota Viking Matt Blair have helped the United States team in past years.

The tug rope is strung across Rainy River, the international boundary between the U.S. and Canada.

Former Minnesota Viking Bob Lurtsema confers
with the referee prior to the celebrity pull.

After the celebrity pull, it’s time for community members to gear up for the official pull for
the trophy and town bragging rights.

Life in a Border Town – International Tug of War Celebrates Friendship and Friendly Rivalry: Each year, “war” is declared on the international border between the United States and Canada. A friendly war, that is, when the two border towns of International Falls, USA, and St. Francis, Canada, take each other on in the annual International Tug-of-War competition.

“Each year the two towns take each other on for the trophy and bragging rights,” said International Falls Mayor Shawn Mason. “When the air horn sounds, each side begins to pull until one side ends up in the river. You don’t lose unless you get wet!”

The event was conceived more than five years ago as a way to celebrate the two cities’ sister city relationship and draw international attention to the peaceful and friendly boarder. It’s become a fun way to celebrate the cities and enjoy summer in the border towns, drawing celebrities and the two towns’ strongest residents to take each other on.

The tug takes place across the Rainy River, which marks the international boundary. Teams from each city stand on one side of the river. A boat pulls the rope across and judges from each country monitor the other team’s pull.

“We hold two rounds of tug-of-war,” explained Robin Bjorkquist, who works for the International Falls Journal and is the volunteer celebrity coordinator for the event. “The first round involves local and statewide celebrities, like members of the Minnesota Vikings. Matt Blair has participated, along with Senators Amy Klobuchar and Al Fraken. The second tug-of-war is the community tug. That’s the one that counts for the prize – which is bragging rights and a trophy.”

While serious competition takes place, the light-hearted rules ensure the strongest team wins. “Cheaters never win and winners never cheat,” said rule number one. “No heavy machinery may be attached to either end of the rope.” Another rule states that the mayor of the losing team must wear the winning team’s high school jersey to the next City Council meeting.

The idea for an international tug was long rumored in the towns before it became a reality.

“The idea was first conceived about 20 years ago,” said Robin. “A member of our town had the idea to hold a tug-of-war across the river. We had great fun talking about it, but it didn’t become a reality until 2006, when the Mayors of St. Francis and International Falls decided to take on the challenge.”

“About five years ago, I met with the mayor of Fort Francis, and we decided to bring the tug-of-war to fruition,” said Shawn Mason, mayor of International Falls. “Now, it’s an annual event that’s growing each year.”

The event’s nickname, “Pulling for Peace,” was chosen to reflect the peaceful relationship the two cities share – something rare among international borders across the world.

“It’s unique to be able to live on an international border,” said Robin. “We share a border, but we share more than that.”

“The event celebrates our sister city relationship across the board in a fun way,” said Mayor Shawn. “We also hope it will draw attention to border communities in North America, and how we live and depend on one another.”

That dependence crosses business, entertainment and local services that the two cities share. Despite an international boundary, the towns have come to rely on one another in many different ways – a relationship they hope to expand in the coming years.

“They have a curling rink and we don’t, while we have a movie theatre and they don’t,” said Mayor Shawn. “Many of our cities residents attend church together and shop at each other’s stores. Recently, when a major fire broke out, the Fort Francis fire department provided backup support. There are numerous examples of how our cities work together on a regular basis.”

“We’re currently working with the United States State Department to expand that relationship even further,” explained Mayor Shawn. “For example, our residents currently need to drive an hour and a half to access dialysis services in the U.S., even though there is dialysis in Fort Francis. If our residents could access health care services in Fort Francis, they could save hours of driving and receive quality care. We want to work with the State Department to make these things possible.”

Drawing a Town Back to its Water Roots

The tug-of-war is celebrated along the Rainy River in the town’s new riverfront development. Centered by the Voyageurs National Park headquarters office, plus a new city amphitheater, the development is helping bring residents and visitors back to the water, an important part of the city’s heritage.

For more than 10,000 years, the waterways surrounding International Falls have been a key highway for international trade. Native Americans first traveled the waterways in search of food and furs. It was those same furs that drew the Voyageurs to the area. These hardy fur traders were folk heroes of their time, heading into the wilderness to find beaver pelts and other furs that were made into luxury goods throughout Europe.  Early voyageurs arrived by canoe, and the waterways around International Falls, including the Rainy River and Rainy Lake, were vital to their success.

“The event’s location is special, because it’s now also the site of the new Voyagers National Park complex, along with a new amphitheater,” said Robin. “We really want this park area to be a central meeting area and a place for fun in our city and help revive the riverfront.”

The event also marks a day to celebrate. Canada Day in Canada, followed by Independence Day in the United States, surround the tug-of-war event.

“After the tug-of-war, visitors can stay for a grill-out, plus later in the day we’ll have a concert and other activities,” said Robin. “It’s really a fun celebration on both sides of the border and marks significant holidays for both countries.”

“It’s a time to have fun, to celebrate our boarder relationship, celebrate the summer in our area, and mark important holidays for both countries,” said Mayor Shawn. “Our cities are a top destination for fishing and boating all summer long. This event helps us enjoy the summer in a fun way.”

And no matter who wins, the friendly rivalry – but most importantly, the friendship – between the two cities continues, marking another summer along the border.