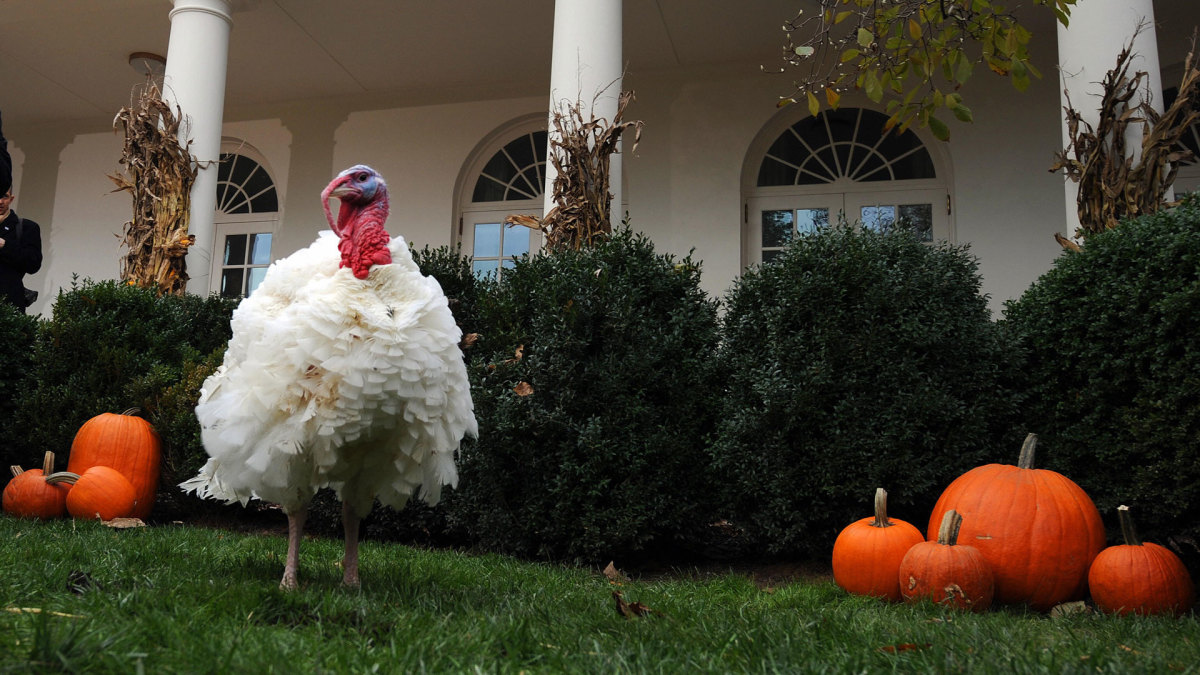 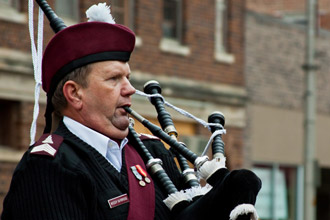 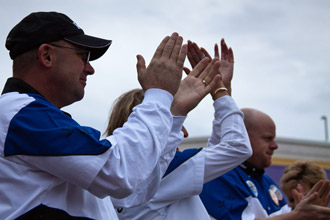 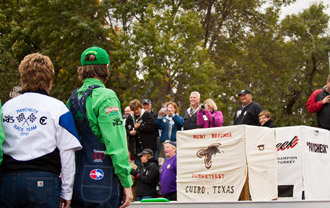 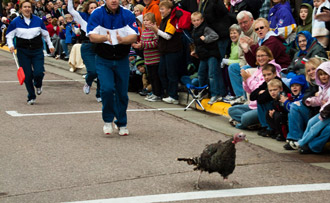 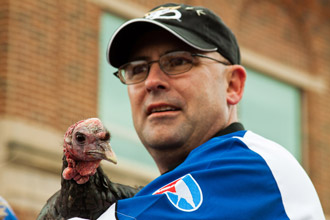 Chris Heinrichs with “Paycheck” after
the “Great Gobbler Gallop” 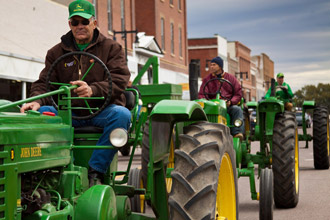 When two towns each claim the title of the “Turkey Capital of the World,” what’s the best way to settle things? “Each year, we settle it with a race,” said Chris Heinrichs, of Worthington, MN, one of the two cities claiming to be the nation’s top turkey town.

Since 1939, Worthington, MN has hosted King Turkey Day™ each fall, including a pancake breakfast, parade, music and other activities to celebrate the town’s place as the “Turkey Capital of the World.”

But that title hasn’t come without a fight. In 1972, the people of Worthington discovered the city of Cuero, Texas, which also holds an annual turkey festival, also claimed to be the nation’s turkey capital. The issue could only be settled one way – a race. Since that day, the “Great Gobbler Gallop” has pitted Worthington’s most athletic turkey against a bird from Cuero.

Worthington’s turkey (named Paycheck, since nothing goes faster than a paycheck) and Cuero’s Ruby Begonia face off each fall.

“Paycheck and Ruby Begonia first race in Worthington at King Turkey Day in September. We then go down to Texas in October for Cuero’s Turkeyfest. The times for each race are added together to determine the winner, and penalties can be added if the team touches the bird or picks it up during the race,” explained Heinrichs, captain of the 2010 Paycheck race team.

What’s the trick to training a race-winning turkey? “I’ll never divulge our strategy,” said Heinrichs. In the nearly 40 years the birds have been racing, Paycheck has won about half the races.

A must-stop political campaign destination for past leaders like Lyndon Johnson, Richard Nixon, Robert Kennedy and Hubert Humphrey, King Turkey Day celebrates Minnesota’s place as the largest turkey producing state in the nation. Historically, a flock of turkeys would lead the parade, marching down Worthington’s downtown streets. Although the turkeys no longer lead the parade, it remains the centerpiece of the weekend’s events.

“Each year the town doubles in size during King Turkey Days, from 5,000 to a crowd of about 12,000 for the weekend,” said Vida Iten, president of the festival. “People usually start putting out their chairs on Friday evening to reserve a spot for Saturday’s parade.” The parade, community pancake breakfast and commemorative button have remained traditions. Since then, the festival has expanded.

“When the festival was started, it was held on Wednesdays as an opportunity to honor local farmers. Schools would close for the event. It’s now become a three-day event, beginning with a mixer on Thursday recognizing the teams from Worthington and Cuero and continuing through the Parade and race on Saturday. Each year we add new activities.”

The festival also includes a 10K Race that travels through the same street as the turkey race. It’s become popular among those training for the Twin Cities Marathon and has attracted racers from all over the state and the Midwest.

Though the King Turkey Day race may not have settled the dispute between the towns, Minnesota holds the title as the nation’s top turkey state. The state ranks No. 1 for turkey production, processing and hatching in the nation, according to the Minnesota Turkey Growers Association. More than 45 million turkeys are raised in Minnesota each year – enough to provide for every Thanksgiving dinner in the United States, according to the U.S. Department of Agriculture.

As the teams say, “It’s not over until October.” While the dispute continues on, so does the celebration each September.

If You Go:
Start your Saturday with the Pancake Breakfast at the Worthington, MN fire station – but get there early as it’s a popular destination. Other activities include a brat feed, horseshoe tournament and hot turkey on a bun meal before the parade. In the evening, stay for live music.

Lodging:
Plan early to reserve a room at The Historic Dayton House bed and breakfast. It’s centrally located to keep the weekend’s festivites all within walking distance. The house was built 1890 by George Dayton, ancestor of the Dayton retailing family, who moved to Worthington to establish its first bank and found the Minnesota Loan and Investment Company. Today, the inn offers two suites, with private sitting rooms, full baths, antique furniture and flat screen TVs.

Getting There:
Take Highway 35 south to Highway 90 west. Worthington, MN is less than an hour east of the South Dakota border, and less than 30 minutes north of the Iowa border.

While You’re There:
Visit Blue Mounds State Park in Luverne, MN, one of the best spots in the state to view prairie grasses and wild flowers. Catch views of the park’s bison herds, and see the prickly pear cactus that grows in the park.