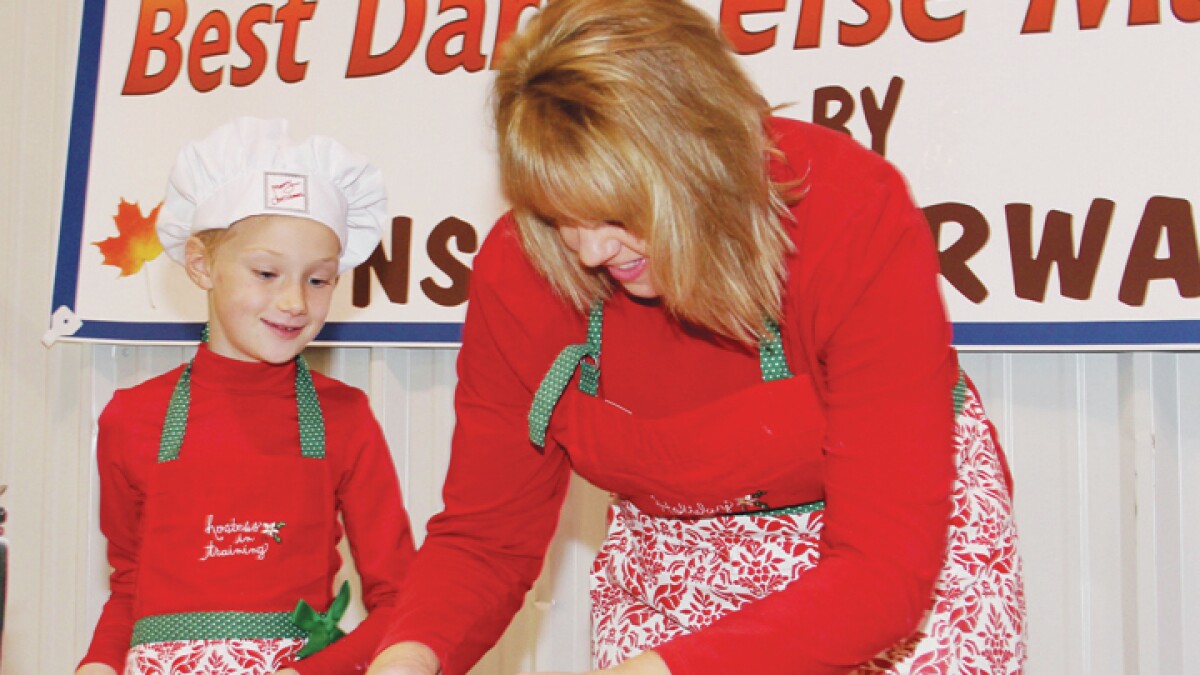 Made of potatoes, butter, cream and flour lefse is a Norweign flatbread that’s become a MN holiday favorite.

Small circles of lefse dough are carefully
rolled into a large, thin circle.

Lefse is placed on the grill with a
long, thin turning stick.

Visitors to the National Lefse Cookoff can watch lefse making live and taste a sample themselves.

Jean Olson, the “Lefse Queen,” demonstrates how she rolls her dough to visitors at the National Lefse Cookoff.

Judges at the National Lefse Cookoff rate each
piece based on taste, appearance and texture.

“I don’t have any secrets. If anyone wants my recipe I’ll tell them,” said 91-year-old Morrie Howland as he pressed his lefse dough into a small circular pad. “Everyone is different, everyone has their own way of making lefse. Whatever works, that’s the thing to do,” he said with a twinkle in his eye.

It’s hard to imagine Morrie, the three-time winner of the National Lefse Cookoff, doesn’t have a single secret. He places a pad of dough on the lefse board and carefully starts rolling it. The small circle grows larger and larger with each swipe of the rolling pin.

Minnesota arguably is the state with the largest concentration of lefse eaters, so it’s appropriate that it’s also home to the National Lefse Cookoff, a celebration of the Norwegian potato flatbread. Every August lefse cooks from around the region gather in the small Red River Valley town of Barnesville, MN to battle for the title of “best lefse in the nation” during the town’s annual Potato Days festival.

“Each year up to 10 contestants can enter the cookoff,” said Mary Ann Scheffler, cookoff director. “They have to bring their own lefse grill and other tools, and they have one hour to fry the lefse.”

After an hour of cooking they must select just one lefse round for the judges, who rate the pieces on taste, appearance and texture to declare a winner.

“They all look so different,” said Mary Ann. “Some pieces are dark or light, some are heavier. Each contestant has their own secret recipe and way to prepare the lefse.”

The contest is open to any entrant who thinks they make a good piece of lefse. But if you plan to compete, be sure to practice.

“It’s not something you’ll pick up the first time, but that shouldn’t stop you,” said contestant Jean Olson of Deerwood, MN as she prepared her dough. “It’s pretty easy once you get the hang of it.”

That’s easy to say for someone nicknamed the Lefse Queen by her friends. She began rolling the circular dough. “The secret to rolling is to get it as thin as possible,” she explained. “Making a good piece comes with experience.”

“And a little luck,” quipped Morrie nearby.

Similar to a tortilla, lefse can be eaten with just about any combination of foods. But around Minnesota, it’s more traditionally enjoyed as a dessert, spread with butter and sprinkled with sugar. It’s a favorite of many families around the holiday season. For lefse experts like Morrie, that’s also the most popular time of year to practice his lefse-making skills.

“Each year I make about 1,000 pieces during the holiday season,” he said, as he rolled a piece of dough. “I make lefse and I also make a lot of krumkaka, which is a Norwegian cookie. I have so much fun making them, but we can’t eat them all so I like to share. I bring them to holiday gatherings, church and local rest homes.”

That practice has paid off in multiple wins and a second place finish at the National Lefse Cookoff. He’s now become a recognized contestant at his cook station near the front of the kitchen, overlooking the crowd that gathers to watch. As each chef prepares their dough, visitors mingle near the window overlooking the kitchen to ask questions and learn a few new tricks.

Soon frying begins. Each participant quickly rolls their dough, and then carefully places each thin piece on the grill. The room fills with the smell of freshly cooked lefse.

“Wait until there’s a slight sizzle on the grill, then the dough bubbles,” Morrie explains to the crowd gathered near his station. “Wipe the griddle clean between pieces.”

“Choose the best potatoes. I’ve used many different potatoes, usually Yukon Gold or Russet,” explains Jean as she rolls. “But I think you have to use real potatoes. The first time I made lefse with my husband I found a recipe in the newspaper that called for fake potatoes. I mixed it up and it turned out like wallpaper paste. Then we kept adding more flour but it didn’t work. The two of us could barely carry the mix to the waste basket it was so heavy.”

Before long cooking time ends and each contestant picks the piece they believe is their best. While judges confer in another room, visitors mingle and enjoy their own taste of lefse and coffee from Minnesota’s Lena’s Lefse. Minutes later the judges emerge to declare the winner.

“And the winner is…” said judge and emcee Chris Hanson, a local radio deejay.”Morrie Howland!”

Once again, Morrie comes out ahead. But is he sure he doesn’t have a secret recipe?

Lefse can be enjoyed any time of year, but it seems the thin bread has made its way into our holiday heritage, a must-have treat as families gather throughout the season. A tradition worth learning, lefse tools and instruction are available at stores throughout the state. But if you’re not up for making your own this year, pick up a homemade pack at a local bakery or some grocery stores across the state this holiday season, and be sure to pick up some extra pieces to share.