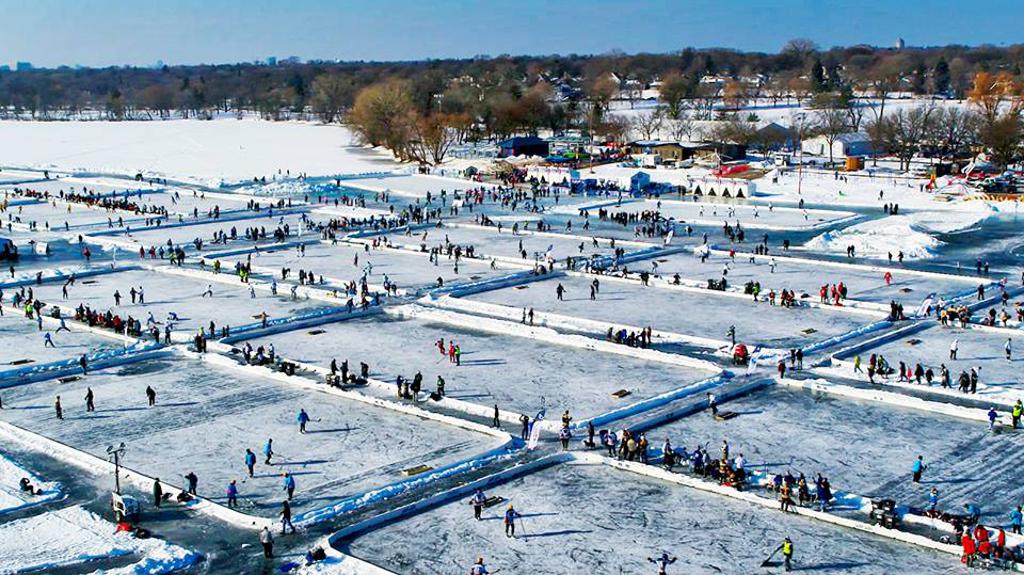 Lacing up skates for a game of hockey is a
favorite MN tradition celebrated by the USPHC.

Each year more than 2,000 players and 20,000 spectators gather to compete in the nation’s
largest pond hockey tournament. 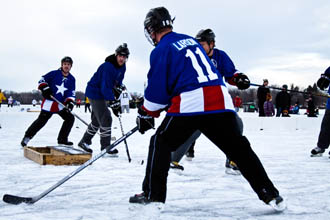 Teams of six players play more than 700 games during the week-long US Pond Hockey Championship. 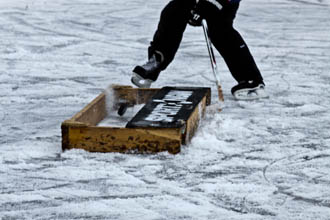 The number of teams participating in the USPHC has more than tripled since it was founded in 2006.

For many participants, the tournament is an opportunity to return to the game of their youth,
the way many learned to play.

The tournament is open to anyone interested in forming a team, including teams with former
pro hockey players.

Each year more than 700 youth players participate in the tournament, from around the state and region.

Between games, the USPHC warming house turns into the largest locker room as teams gear up and strategize.

Teams compete for the coveted golden shovel, which carries the names of past tournament winners.

Inside the warming house, players sharpen their skates as they prepare for their next game.

Love of Hockey Leads to Nation’s Largest Pond Hockey Championship: Since the first Minnesotans cleared snow off the lake and strapped skates on their feet, we’ve been the state of hockey – home to more National Hockey League players than any other state and the greatest number of hockey players under age 18 (at more than 46,000).

It’s the state’s lakes and ponds that many have to thank for their early love of the game and the first skills they built on the ice.

The love of the game is what drove Minnesotans to create the U.S. Pond Hockey Championship, the nation’s largest pond hockey tournament.

“The championship was founded on the idea that when we were kids, we would play hockey outside, on the pond. That’s how we learned to play, and that’s our memory,” said Justin Kaufenberg, co-commissioner of the U.S. Pond Hockey Championship.

“For many, playing hockey on the pond is the most fun they ever had while playing. Being out there on the pond in the cold, you’re out in the elements. You’re bundled up out there, playing on the surface itself,” said Justin.

Today, the U.S. Pond Hockey Championship allows its more than 2,000 players to return to the game of their youth.

Founded in 2006, the weekend-long championship draws teams of six players from around the country – and further – to play more than 700 games on Minneapolis, Minnesota’s Lake Nokomis. Over the years, the tournament has grown from a homegrown event to a national tradition.

“The growth of this event has been immense,” said Justin. “The first tournament had 100 teams. We thought that was amazing. And now it’s grown to 300 teams. We have more than 2,000 players participating in the weekend’s events. Today, it’s the largest outdoor hockey tournament in the nation.”

“The first year, many of our players were from Minnesota and the surrounding states,” he said. “Now we have players from 40 states and four countries joining the tournament.”

The tournament is open to anyone interested in forming a team of six. Several divisions appeal to different styles of play. The open division is the most competitive, while other divisions are open to those over 40 years old, over 50 and women’s teams. A “Rink Rats” division is open to players under age 18.

“We’ve had players who are returning to the game after years away, all the way to current and former professional hockey players,” said Justin. “Past pro players have included Phil Housley, Tom Chroske, Brian Bellows and John Madden.”

Facing off against a former pro player can be intimidating, said Justin. “But the ice is a great equalizer. The ice will have cracks and holes. It’s not a perfect sheet of ice like a pro rink is and rinks aren’t the same dimensions as an indoor rink. There’s no Zamboni out here.”

For the Love of Hockey

On Saturday, tournament play is in full swing. At times, 26 games are occurring on the ice at once. The slice of the skates, the shouts and cheers of the players and music fill the air. Over the course of the tournament, more than 20,000 spectators will participate.

“Two minutes,” yells an official, as players scramble after the puck. “It’s seven to seven.”

The puck files off the rink, and the official quickly throws another onto the ice. Players chase the puck, and the crowd steps back as they approach the board.

Games are played in two 15 minute periods, with a two minute half time. When the game ends, players huddle just off the rink.

“We’re 1-0 right now,” said Nick, a six-time tournament participant. “Last year we won two of our three games. This year, we’ve won one so far, so hopefully we have a winning year.”

“This year, we decided to get a serious team together, and see what we could do,” he said, gesturing to his team. “We have a strong team this year, so we hope to advance pretty far in the tournament.”

Each team plays three round robin games, and then plays further in the tournament based on their results.

As games end, players shuffle into the warming house – which becomes the world’s largest locker room on the day of the tournament. They watch the leaderboard as it scrolls on screens around the room and enjoy the chance to rest before the next game, while a new set of teams shuffles out onto the ice and begins practicing.

One of those teams, the Zamboni Drivers team, takes to the ice for its fifth time playing in the tournament.

“This is already our third game,” says the team coach. “We’ve been pretty evenly matched this year. Some years you play against tough teams, and other years it’s easy. This year has been fun because it’s been very competitive. It makes for a more intense game.”

At the edge of the ice, a group of kids plays a pickup game, mimicking the adult games going on across the ice.

“Each year we have 700 youth players that participate in the tournament,” said Justin. “We all owe so much to the game of hockey, and we want to be able to give back.”

Giving back brings back the great memories of pond hockey as a child.

“When we were kids we could just throw two hats on the ice for goals. There were no boards or no rails. It makes you more creative,” he said. “We didn’t care. The thing that mattered is that we were out there.”

That same passion for the game is what brings many teams out year after year, for the country’s largest pond hockey tournament.

If You Go:
The U.S. Pond Hockey Championship takes place in mid-January. Participation is open to any group of six interested in forming a team, and special activities allow children to compete on the ice. Spectators are able to watch on the ice and meet with their favorite teams in the warming house.

Getting There:
The U.S. Pond Hockey Championship is played on Lake Nokomis in Minneapolis. Public parking is available off of Cedar Avenue. Take Hwy 62 to Cedar Avenue North.