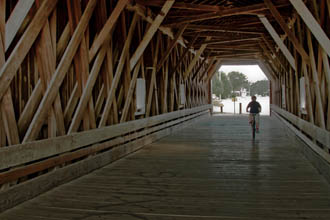 Wooden bridges like the one in Zumbrota served a practical purpose of extending the lifespan of the bridge. 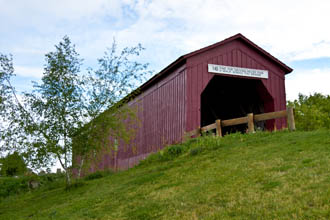 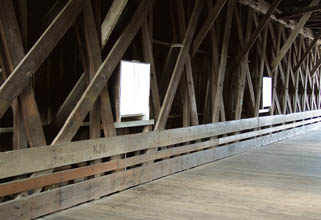 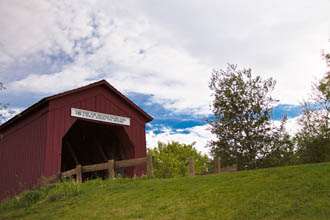 A Symbol of Our Past Stands the Test of Time: It’s the charm, romanticism and historic ties that draw us to covered bridges today, but those same covers once had a more practical purpose – extending the lifespan of a wooden bridge by as much as 10 times.  Or in the case of Minnesota’s last remaining covered bridge, more than 100 years.

The Zumbrota Covered Bridge was built in 1869 along a stagecoach route between St. Paul and Dubuque, Iowa, on what became Highway 58. It was originally built for $5,800, and today it still features the same sign over the bridge entrance: “$10 fine for driving faster than a walk across this bridge.”

Wood bridges were popular in the 19th century, especially in areas where wood was plentiful. But typical bridges lasted only about nine years before they deteriorated due to weathering and rot. Designers found that covering the bridges protected the trusses, thus lengthening the lifespan to 80 years or more.

Today, modern materials like steel and concrete allow uncovered bridges to last for decades. But some wooden bridges still stand, mainly in rural areas of the country as a mark of history. Covered bridges further revived their fame in the early 1990s with Clint Eastwood and Meryl Streep’s film, Bridges of Madison County.

As for Zumbrota, MN’s bridge, in 1997 it was moved to a new location 1,000 feet away in what is now the Covered Bridge Park. Passersby can walk or bike through the bridge, and every year the city holds the “Covered Bridge Music and Arts Festival” in honor of it. It remains a lasting symbol of our state’s pioneer days, and a romantic tie to the past.

If You Go:
Visit the Zumbrota Covered Bridge any time of the year in the Covered Bridge Park. Enjoy the park’s bike and walking trials that cross the bridge, and stay to take a dip in the community pool or enjoy a picnic.

Getting There:
On Hwy 52, take the Hwy 60 exit east. Turn left at Hwy 58 and continue north to the park. There is plenty of parking nearby the bridge, which is just a few steps away.

While You’re There:
Visit the historic bridge on your way to a Weekend Away in the bluffs region of Minnesota. Head south to Rochester, or continue further to Lanesboro or Forestville/Mystery Cave State Park to visit the Historic Forestville Site and the state’s only two caves, Mystery Cave and Niagara Cave, that are open for public tours.  Or head east to the river town of Wabasha.