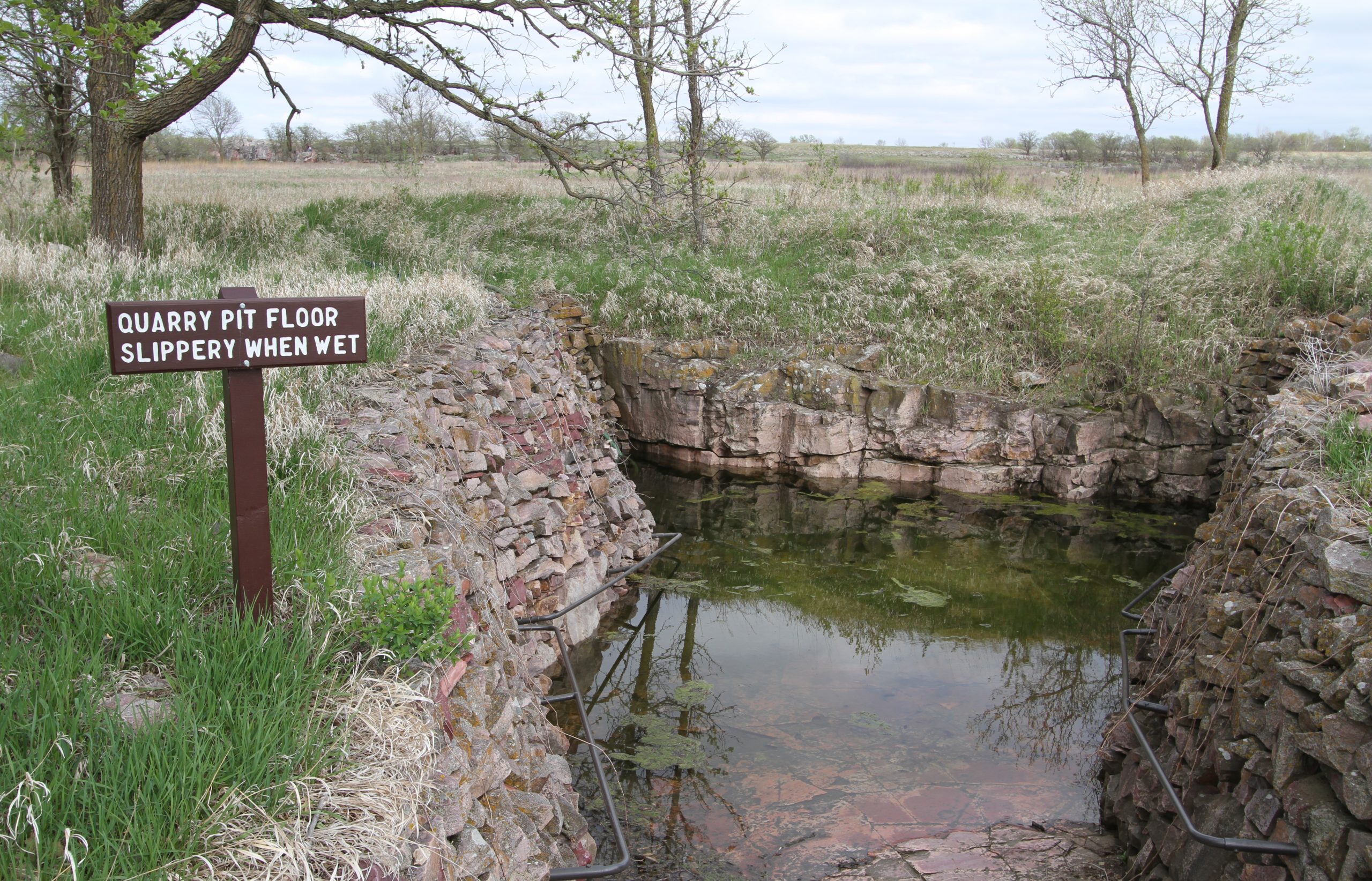 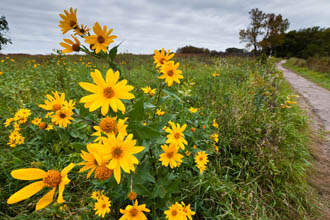 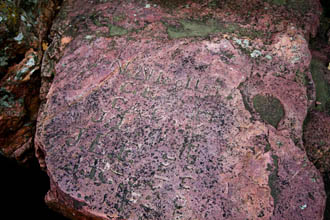 Markings from Joseph Nicollet’s 1838 expedition
to Pipestone can still be seen etched in the stone. 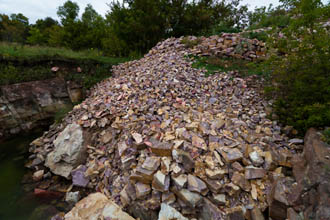 Pipestone quarry tailings over thousands
of years of activity in the area. 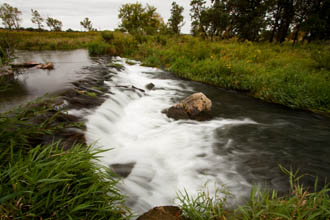 Pipestone Creek flows through the
National Monument via graceful rapids. 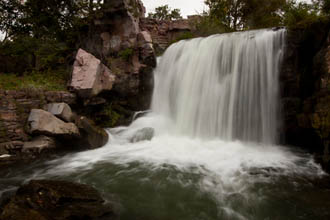 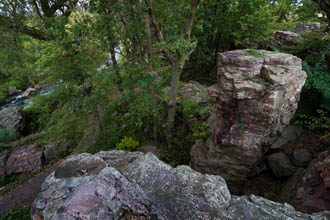 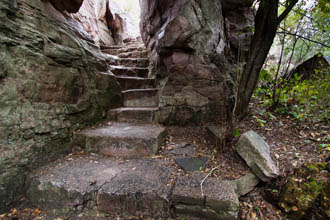 A stone staircase allows visitors to
travel alongside Pipestone Creek. 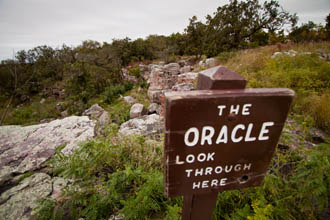 The Oracle, a face-shaped stone, can be clearly
seen by looking through the sign-post hole.

For more than 3,000 years, Native Americans have traveled to the tallgrass prairie that 19th century cartographer Joseph Nicollet once called the “high, grand and beautiful prairie,” in search of a soft stone colored brick red to mottled pink. A sacred place of peace, both friends and enemies worked side by side to carve the smooth stone they found there into ceremonial pipes. Today, the Pipestone National Monument protects the stone and commemorates its ancient history and sacred use that continues today.

In 1838, the U.S. Government commissioned an expedition led by Joseph Nicollet to explore the lands that would become Minnesota, North Dakota and South Dakota. When Nicollet arrived at the place known as a sacred Native American ground, he was stunned by its beauty, recalling in his journal, “the view to the south seems limitless, the verdure losing itself far away in the azure of the sky. The spectacle is full of grandeur because of its simplicity.”

He arrived to find a place that was long known among tribes across North America. For thousands of years, they came to quarry the soft stone into pipes used during prayer. Native Americans believe when they pray while smoking the pipe, their prayers are carried through the smoke to the Great Spirit. Whites who were most familiar with seeing them during treaty signings misnamed them “peace pipes,” but they are known to Indian tribes as the means of communication between humans and spirits.

It was another explorer and artist, George Catlin, a few years earlier who first realized the stone in this area was unlike any other when he arrived in 1836. By the time Catlin arrived, Native Americans were carving elaborate designs, although the t-shaped “calumet” design was most common. Despite objections from local Sioux who said the area was off limits to whites, Catlin visited the quarry and painted scenes of the area. He recorded the importance of the quarry, through stories told by local Indians:

“At an ancient time the Great Spirit, in the form of a large bird, stood upon the wall of rock and called all the tribes around him, and breaking out a piece of the red stone formed it into a pipe and smoked it, the smoke rolling over the whole multitude. He then told his red children that this red stone was their flesh, that they were made from it, that they must all smoke to him through it, that they must use it for nothing but pipes: and as it belonged alike to all tribes, the ground was sacred, and no weapons must be used or brought upon it.”

He also took a sample of the stone and sent to Boston for study, where geologists named it Catlinite after him. All along though, it’s been more commonly known as pipestone.

As settlers moved west, a greater number of non-Native Americans came to the area. In 1858, the Yankton Sioux received rights to the area through treaty. They later sold the lands to the federal government, and in 1937 the one-square-mile area became a national monument, open to the public and available for quarry to Native Americans.

Today, the pipe remains an important part of Native American ceremony, as it has been for thousands of years. The Upper Midwest Indian Cultural Center, located within the Pipestone National Monument visitor center, showcases carving demonstrations by local carvers who have been taught the practice by ancestors. Many of their pipes are available for viewing and purchase in the gift shop.

Walking outside, the three-quarter-mile Circle Tour takes visitors across the prairie and through quarry grounds. Only people of Native American ancestry with a special permit can quarry the area or remove any stone. But other visitors are able to walk through an interpretive trail through the quarry and to the 20 ft. Winnewissa Falls. The trail passes the Pipestone Creek, up a stone staircase, and past the Leaping Rock that Native American teens would jump across to prove their bravery, also called Old Stone Face for its face-like shape.

Carvings mark the spots where early settlers to the area crossed, including a stone where Nicollet and his fellow explorers chiseled their initials. Further along the trail, listen carefully near a rock formation called the Oracle, a face-shaped stone that legend says provides wisdom to travelers who visit.

Walking back toward the visitor center you’ll pass an area of the restored prairie. At the time Native Americans first quarried in the area, there were more than 18 million acres of tallgrass prairie in the state. Today, less than one percent remains. At Pipestone, the prairie that was found to contain at least 500 different plant species is being restored and protected through protective burning practices that began on the site in the 1970s. Purple and yellow wildflowers now dot the prairie among the grasses, providing a glimpse of what Native Americans likely saw as they visited the quarry thousands of years ago.

If You Go:
Pipestone National Monument is open year round, though the beautiful prairie is best seen in the summer and fall. Visitor passes those age 16 or older are required to enter the visitor center or Circle Tour.

Getting There:
The monument is easily accessible near Hwy 30 and Hwy 75. From the south or east, take I-90 to Hwy 75 north, through Luverne, and Pipestone will be about 25 miles north.

While You’re There:
Spend time enjoying our prairie heritage. Less than 25 miles south of Pipestone, visit Blue Mounds State Park, a restored prairie park that’s home to its own bison herd. The park offers camping, hiking and is a great rock climbing location. Nearby, visit the 800-acre Touch the Sky Prairie.

On your way home, mark your trip to pass Jeffers Petroglyphs, an hour and a half east of Pipestone in Comfrey. Thousands of ancient rock carvings have been preserved, alongside a native prairie.

Plan to stay the night nearby at the Historic Calumet Inn, an 1888 hotel in downtown Pipestone. The recently renovated rooms preserve many of the hotel’s antiques, with modern luxuries like wireless internet and Jacuzzi tubs. Two full bars and a restaurant are within the hotel.