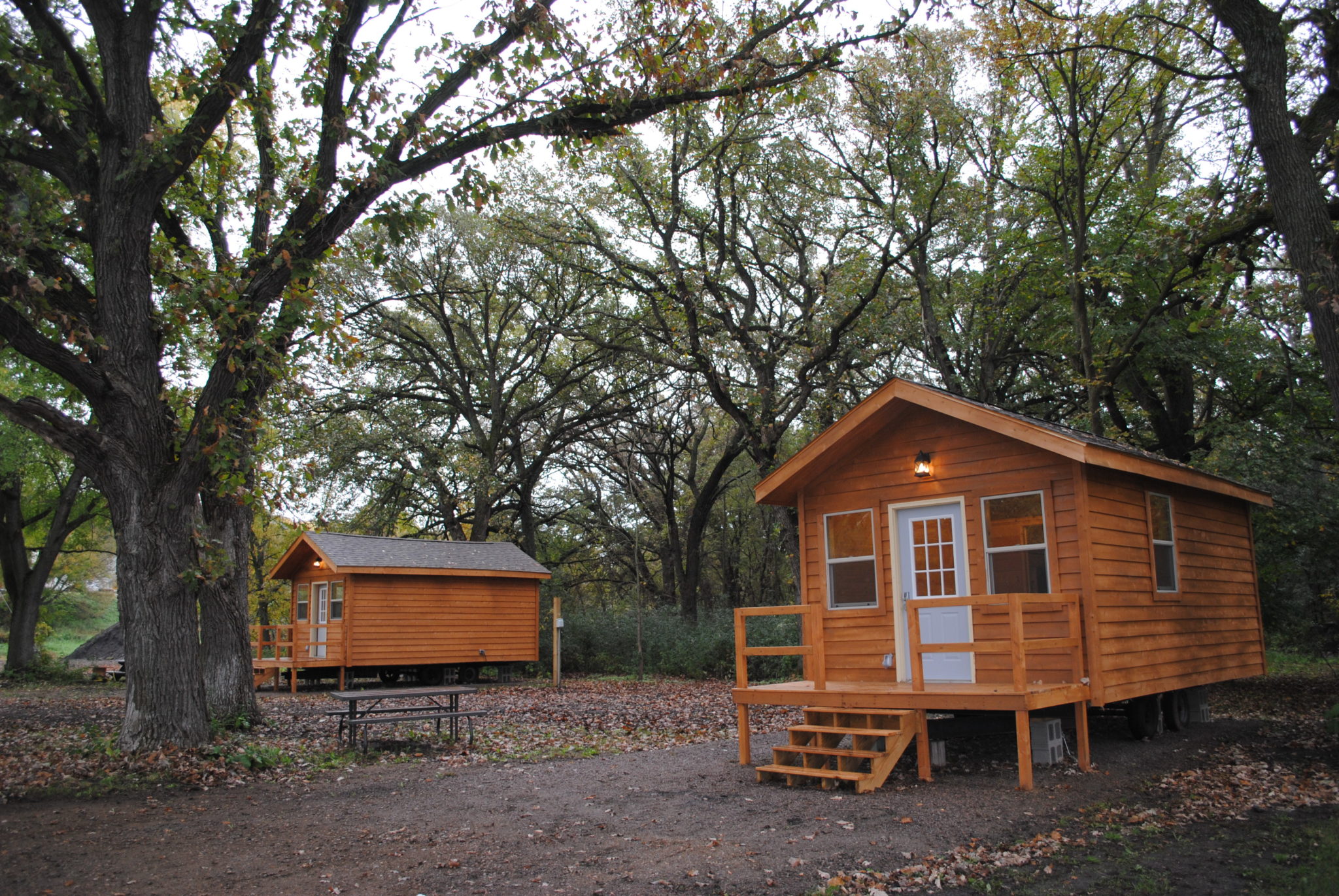 In the region where rolling prairie lands are crisscrossed by winding rivers – including the Chippewa, Lac Qui Parle, Yellow Medicine and Minnesota Rivers – you can see farm fields, waving grasses and wildflowers for miles. It’s a region at a crossroads, not just of rivers, but of its next stages that will likely be highlighted by its organic farms, handmade goods and quiet getaways that dot an area whose history and future is in its land. 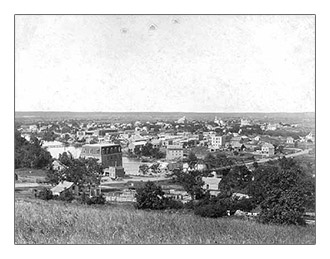 Prairie Waters history dates back hundreds of years when the Sioux Indians came to the lands along the Minnesota, Yellow Medicine, Lac qui Parle and Chippewa Rivers to hunt and fish. The first European visitors to the area likely were fur traders, but it wasn’t long before the land was sought after by settlers who arrived by the mid-1800s.

Settlement soon meant conflict. As Native American tribes were pushed further west and onto smaller and smaller reservations, tensions rose. The Upper and Lower Sioux Agencies were established to distribute food to reservations and teach Native Americans to farm the land, but treaty violations soon led to hunger among tribes.

Tensions brook out into conflict. The Dakota Conflict of 1862 led to the Battle of Wood Lake, where Chief Little Crow and 700 members of the tribe battled with Colonel Henry Sibley and local rangers. Then, in an attempt to drive white settlers away, the Sioux Indians destroyed the Upper Sioux Agency site. By the end of the conflict, as many as 800 settlers were killed and more than 1,000 Native Americans were taken captive. In December 1862, 38 Dakota (Sioux) Indians were sentenced and executed in the largest one-day execution in U.S. history. The following spring, the tribes were expelled from their lands to South Dakota and Nebraska and their reservations were abolished by the U.S. government.

Within only a few years, towns sprang up along the rivers. Chippewa City became the first town in the area, laid out by Daniel Wilkins in 1868 on the Chippewa River north of its confluence with the Minnesota River. It served as the first county seat, but was absorbed by the city of Montevideo when it was established in 1870.

The first settlers to arrive in Montevideo were Civil War veterans who were given land scrips for their service. Others quickly followed to establish farms in the area. Granite Falls was named for the stone outcroppings along the Minnesota River and soon became another prime farming town in the region.

The area was also known for one of its notable residents, Congressman Andrew Volstead. Serving nine terms in the U.S. Congress, Rep. Volstead is known for authoring legislation creating farm cooperatives which is still in use today, as well as infamous legislation establishing prohibition, known as the Volstead Act.

Over the years, the economics of farming have changed. But the towns of the prairie region maintain their charm that has made them a destination and quiet escape for decades.

Hinterland Vineyards and Winery in Clara City, MN
is one of the best cold-climate wineries in the state. 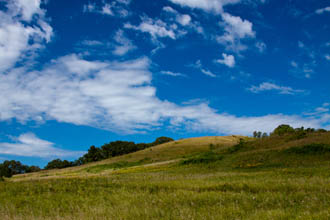 The Upper Sioux Agency State Park has miles of hiking trails that provides scenic vistas of the surrounding areas. 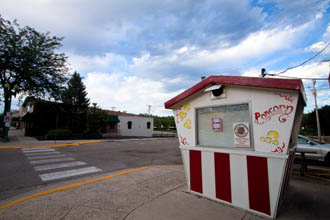 Serving up freshly popped popcorn nightly for over 60 years, the Granite Falls, MN Popcorn Stand is a must stop. 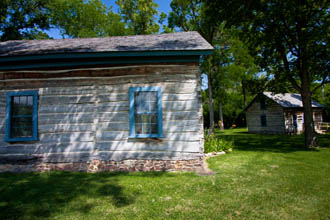 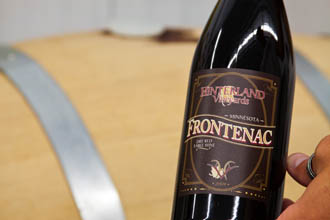 Hinterland Vineyards and Winery in Clara City, MN is one of the states best cold-climate wineries. 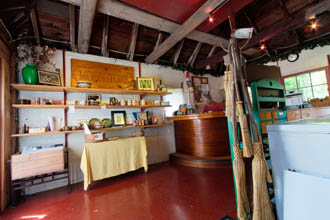 Moonstone Farm in Montevideo, MN, sells its own produced goods such as grass fed beef, honey, and handmade pottery in its farm store.

Don’t miss Upper Sioux Agency State Park, a prairie gem with scenic vistas of the surrounding area and miles of hiking trails. The park preserves the Upper Sioux Agency historic site and offers one of the most unique stays in the state – a tipi. It also features top recreation, including fishing in the Yellow Medicine and Minnesota Rivers, bird watching and horseback riding trails. In the winter, the park’s sledding hill is a favorite, along with snowmobile and snowshoeing trails.

In the fall, the region’s 150,000 acres of state-run wildlife management lands are open for public hunting, including pheasant and deer hunting. The region is also a major migration route for wood ducks and mallards, as well as more than 150,000 geese each year.

View the World’s Oldest Rock at the Yellow Medicine County Historical Museum’s grounds. The Gneiss stone was formed about 3.8 billion years ago and is the oldest exposed rock on the Earth’s surface. The pinkish to red granite stone rises above ground level. Nearby, see a piece of cut and polished stone.

Head downtown for a snack at the Granite Falls Kiwanis Club Popcorn Stand. Open May through August, the stand offers freshly popped popcorn with real butter and 1919 Root Beer. The stand has been a part of the city for more than 60 years.  “It’s great that we’re able to carry on a tradition that has been a unique and fun part of the city for decades,” said Michael Betker, Kiwanis member and popcorn stand volunteer. The stand continues to occupy its spot at Prentice St. and Eighth Avenue and serves up freshly popped popcorn from 7-9:30 p.m. each night.

Tour the historic Andrew J. Volstead House in downtown Granite Falls. Home of the nine-term Congressman known for authoring legislation that enabled farm cooperatives, as well as the Prohibition Act, known as the Volstead Act. The restored home contains many pieces of furniture, books and other items belonging to Congressman Volstead, who later went on to serve as mayor of the town, and was also a long-time lawyer in the area.

Visit Historic Chippewa City in Montevideo, a restored pioneer village featuring 24 actual buildings set on 20 acres dating back to 1868. The village features a bank, post office, millinery shop, firehouse, blacksmith, several real log cabins and church buildings and a general store. Inside each building is an extensive collection of authentic antiques – one of the most extensive collections you may ever see.

Stop for a wine tasting at Hinterland Vineyards and Winery in Clara City, MN, one of the best wineries in the state. Try a Frontenac or Marquette, La Crescent or a dessert wine – you can’t go wrong. The on-site tasting room offers bottles for purchase. Plan ahead to attend a Wine and Dine event at the farm.

Shop for locally made food and other goods, including:

Take a course at Milan Village Arts School. Try your hand at carving, silversmithing, jewelry making, knife making, sculpture or leatherwork, among many other offerings year round. Classes range from beginner to advanced and many classes are one-time or weekend-long. 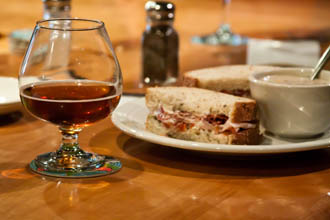 The Prairie Waters region has many great places for simple yet well appointed soups, sandwiches and brews.

In downtown Montevideo, MN stop for a home cooked meal at Valentino’s Restaurant. The traditional menu also features homemade pies and other pastries and a selection of wine and beer. The downtown area also includes Chinese and Mexican restaurants and Java River Café, offering soups, sandwiches, breakfast items and a full coffee shop.

At nearby Prairie’s Edge Casino, Firefly Bar & Grill offers a modern bar & grill atmosphere and menu, including dishes like steak and seafood. The grill features live music on the weekends. 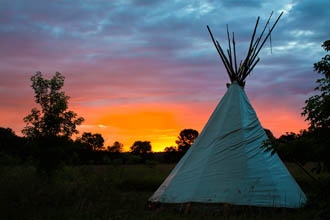 At 18′ in diameter tipi camping at Upper Sioux Agency is likely Minnesota’s most unique camping experience.

Upper Sioux Agency State Park: One of the most unique camping experiences in the state is found at Upper Sioux Agency, where visitors can rent an 18-foot diameter authentic canvas tipi. Inside, the permanent structures include a cedar wooden deck, so sleeping mats are recommended. The sites feature fire pits and picnic tables and have beautiful views of the morning sun rising on the prairie.

Moonstone Farm Stay: Spend the night on a working farm. Moonstone’s one-room Broodio cottage offers a cozy stay for two, surrounded by gardens, a vineyard and open pasture for grass-fed beef. The farm stay offers a canoe, grill, campfire, sauna and beach on the farm’s small lake for guest use, and full bathing facilities in the main house. 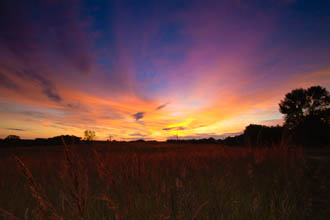 In the late summer the prairie grasses, especially the giant bluestem glow orange is the sun sets over the Upper Sioux Agency State Park prairie.

Visit the first weekend in August for the Upper Sioux Community’s annual Wacipi. The pow wow, held at Firefly Creek on Hwy 67, includes traditional song and dance performed by participants from around the region. Food and Native American arts and crafts are for sale.

The first weekend in October brings the annual Meander Upper Minnesota River Art Crawl. Visit more than 40 artist studios around the region, showcasing painting, pottery, jewelry and other artwork. Many local restaurants and shops also offer specials during the crawl. 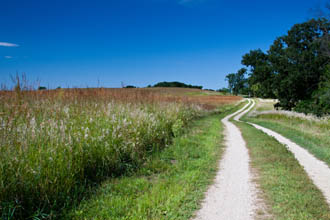 In late summer at the Upper Sioux Agency State Park the parks roads are lined with tall prairie grasses.

The Prairie Waters region is about two and a half hours directly west of the Twin Cities along Hwy 212 and about two hours southwest of St. Cloud.